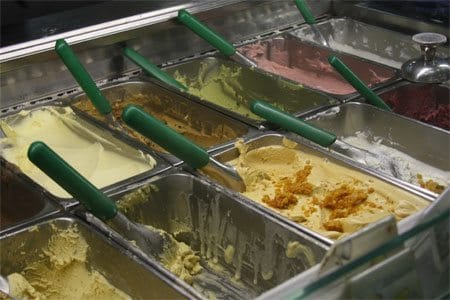 This weekend in their Globspotters Blog, the Times ran a short piece claiming the gelato at Bar Pica near Largo Argentina is Rome’s best. It is undoubtedly noteworthy, but in this city, the crown should not be given away so easily. Yes, Pica’s manna flavor (mentioned in the post) is very good and when paired with pistachio, it makes a fine ode to Sicily. The riso con canella and caramel verge on the remarkable. But there is something about the slightly grainy texture of these and other offerings that makes me long for the creaminess of the gelato at Ciampini, or even Giolitti! Pica’s gelato shares its consistency with Il Gelato di San Crispino, which I hate. And no matter how whimisical its flavors, Pica will never surpass the greatness and creativity that is Fata Morgana. I know other gelato-loving locals would agree. Food in Rome is right there with me on Fata Morgana and Moscerina swears by Gelato del Teatro.

Where do your allegiances lie?