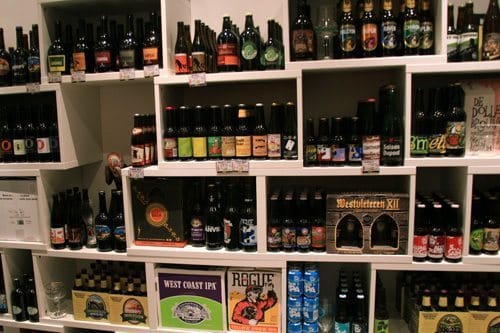 The craft beer trend is in full effect in Rome and small pubs and beer shops have cropped up all over town. Some are more serious than others and not all are worth a dedicated trip, but Birra + has been holding it down in Pigneto since 2009 and I routinely head there for super hoppy New and Old world brews. On October 17, Birra + became twice as nice when it opened a second location, in Garbatella. I stopped by for the inauguration and the place was packed (free tap beers have that effect).

The new location is a bit smaller than the first and on non-inauguration nights will be selling a huge array of quality bottles. There are only a few stools near the register, so be prepared to stand and imbibe, either in the shop or on the sidewalk outside.

Keep your eyes peeled for my favorite British brewery, The Kernel, which is making its Italian debut (on tap, bottles to follow) at Birra +.