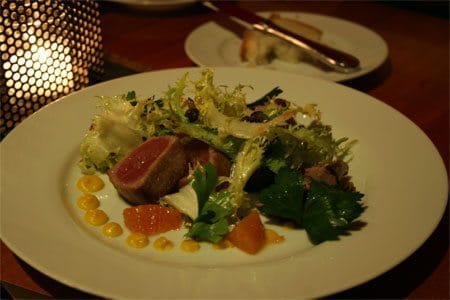 A few weeks back I had dinner at Hearth in NYC. I had heard about this place last year from my friends Megan and Liz who adore it and have great taste in food/restaurants. I had high hopes. My dining companions and I tried nine dishes at Hearth. Of these, one of them was insanely delicious (cauliflower and sea urchin roe soup), four of them were very good (steak, lamb, maple donuts, and key lime pie), three were forgettable (seriously, I wrote them down and everything but lost the paper and now don’t remember what they were), and one was an unfortunate waste of a calf heart.

The dish I speak of was a special appetizer: calf hearts and seared tuna salad. I know! Seared tuna has no business being on the same plate as thinly shaved, subtly flavored calf hearts (only barely visible beneath greens on the right hand side of the plate). I don’t know what I was thinking when I ordered. Actually, I can tell you what was on my mind: “I’m going to eat those hearts and it is going to be magical.” The fish was way too strong for the delicate offal and overpowered its taste altogether. Drop the seared tuna and you’ve got a winning salad: hearts shaved paper thin, seasonal greens, and wedges of citrus fruits. Maybe it would not have been the most creative salad placed on a NYC table, but at least such a combination would not have savagely murdered the subtle flavor of those poor little calf hearts. The profound grief that I felt at having lost a great offal experience must be akin to the agony vegetarians feel when they think of slaughterhouses. Or worse.