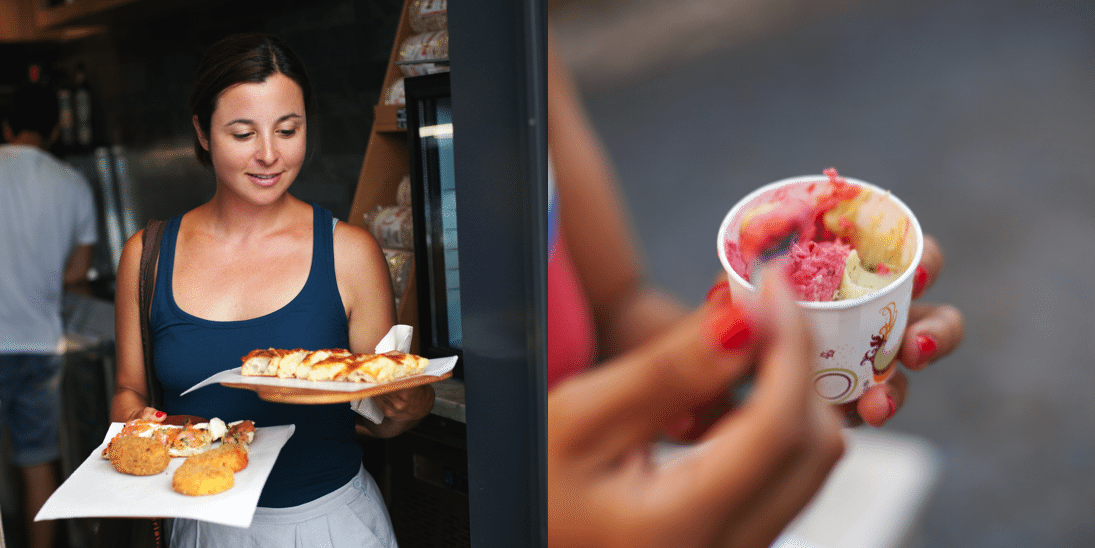 I do not share personal information with third-parties nor do I store information about your visit to this site for use other than to analyze content performance through the use of cookies, which you can turn off at any time by modifying your Internet browser’s settings.

I want to do a tour in Naples (Florence, Sicily, Istanbul, etc). Can you help me?

Yes. Katie has a wide network of trusted colleagues across Italy and abroad.  Contact us and we’d be happy to put you in touch with an excellent guide for historical or culinary tours.

Where should I eat in Rome? Naples? Istanbul? Elsewhere?

Katie has many resources for dining and drinking in Italy and beyond. You’ll find her Rome tips on her blog (especially this post) as well as in her many articles and books, and e-book. She also has two mobile apps for iOS devices (“Katie Parla’s Rome” and “Katie Parla’s Istanbul” and a number of online city guides.

Katie moderates comments, so maybe she hasn’t had the chance to publish it yet.

What’s with all the typos in the blog, Parla? I thought you went to Yale.

Katie writes the blog at 3am after her two full time jobs (touring and writing) so give her a break, will ya?

Maybe. If your idea jives with the Katie’s philosophy, she’d love to read your pitch.

Katie must get free food and special treatment from restaurants, right?

Katie is at the service of the reader. She does not accept gifts, discounts, or free meals. Period. She never has and never will go on a junket. When reviewing a venue, Katie conceals her identity and never announces her intent to review in advance. She pays for all of her own travel and meals, though she is reimbursed by publishers when on assignment for their publications.

Can Katie show me around Rome?

If you would like to book a food tour or beer or wine tasting with Katie, see the tours she offers and contact us for booking.

I would love to become a food and travel writer. Does Katie have any tips?

Yes! Start a blog, be authentic, generate great content, network, tweet, and, if possible, get some academic credentials in the subject you are covering. Also read this post. And never write for a commercial publication for free.

How does service differ in Rome compared to the States?

In Rome, service can vary wildly from friendly and flawless to disorganized and inept. Katie has experienced the former at simple trattorias and the latter in fine dining establishments. In general, though, service is competent and friendly, but perhaps less so than in the US, where servers work for tips. It is also less efficient than in the US, where restaurants turn tables and have multiple seatings. If the service at a Roman restaurant is slow, it is likely that the servers don’t want to rush you (meals have a leisurely pace in Italy). Or that the kitchen is in the weeds–often the entire dining room gets sat at about the same time. One of the major bonuses of Roman service is that if you ask for suggestions or order the “wrong” dish, the server will likely be honest about it.

Katie writes lots of nice things about Rome. And sometimes even Romans. Of course she likes both. Katie writes about the experience of living and working in Rome and doesn’t believe in sugarcoating (exception: Jordan almonds). So if you want to read about how perfect everything in the Italian capital is, you are not going to find any of that here because it is not perfect. Over a third of Italians Katie’s age are unemployed. Most people shop mostly or exclusively in supermarkets. The quality and authenticity of the city’s food has tangibly plummeted in the past decade. There are a lot of great things about living in Rome, but the city has serious problems and they deserve attention.

I am coming to Rome for holiday. Where should I stay?

It seems like she is always eating and traveling. How does Katie bankroll this whole operation?

She gives tours, writes, lectures, provides wine education, and has two apps. She works hard and never takes a day off (ask her exasperated friends, parents and boyfriend). Katie spends lots of what she earns on food, wine, beer and travel. She also writes for several publications, which cover expenses for assignments.

Katie’s from New Jersey. How can she know anything about food in Rome?

Katie can have infinite hoagie knowledge and know about Roman food. Incredible, isn’t it? In addition to living in Rome since 2003 (she doesn’t believe this alone is a legitimate credential), she has a Master’s Degree in Italian Gastronomic Culture and lectures at universities about food and beverages; these topics are her life. Also, New Jersey is a fertile breeding ground for gastronomes (ahem, Alice Waters). It is the Garden State, you know?

How do I reach Katie for a media inquiry?

Good question!  Shoot an email to Katie’s publicist Jackie de Giorgio at press[at]katieparla.com and she’ll get back to you.

I sent you an email and you didn’t reply. What’s the deal?

We reply to every email Katie gets through the contact form. One out of every 20 email addresses gets bounced back due to a typo in the visitor’s email address. We do our best to track you down, but sometimes don’t succeed. Please try again!

My comment was deleted. What the [email protected]#% is your problem?

Katie loves recounting my dining experiences, but without all the people who read the blog, write to her, and make comments, she would not have anywhere near the motivation to keep it going. Of course, not everyone agrees with her opinions, which is fine. She wants to know what readers think and welcome disagreement. That said, she will not tolerate trolls and abusive comments will not be published. This isn’t a democracy and if you want to rant, get your own site!

Where can I buy Tasting Rome?

Tasting Rome is available for pre-order at a variety of outlets. Visit the book’s dedicated page for links. From March 29, Tasting Rome will be available throughout the US wherever books are sold.