Skip to content
Home/Hold Your Horses: Cavallini 23 in Rome
Previous Next

Hold Your Horses: Cavallini 23 in Rome 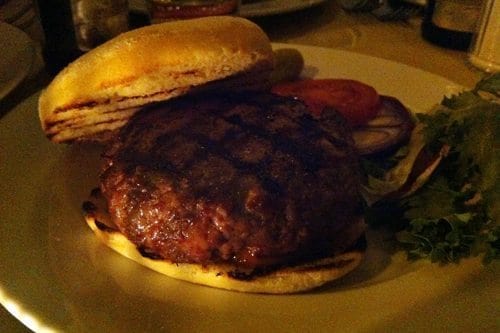 Last night I visited Cavallini 23 (located at Via Pietro Cavallini 23) with my friends Hande and Theo of Vinoroma fame. We went to try the burger, a collective obsession of ours, and one that is incredibly difficult to satisfy in Rome. As I have previously ranted, the city offers so-called gourmet burgers that are nothing short of a crime against nature. They are made from the wrong type of beef (razza piemontese) and from cuts that are too lean (fat=flavor, people!). These foncy poncy burgers are made from knife-chopped, rather than ground meat. A seared wad of tartare on a bun. Gross. And criminal. What a waste of good meat.

But I digress…I heard about Cavallini 23 a few weeks back from a reader named Nicola. Recognizing my obsession with burgers, he wrote to me and suggested I check out Cavallini, citing homemade buns and sauces, and most importantly an American chef who had previously worked in NYC. Promising…

So Hande, Theo, and I went full of hope, and each ordered a burger. First, the pros: the meat grind was acceptable, the bread to meat ratio was ideal, and the meat had grill marks and a crust, indicating that it had been cooked on a hot and adapted surface (those nasty gourmet things are never cooked on a hot enough grill). The cons: the patty was under-seasoned and needed more fat. The nail in the coffin: the bun was a cross between a ciabatta and English muffin. At €16 a pop, the burgers were an expensive disappointment.

But all was not lost. At the end of our meal, an old woman busted out some yoga moves in the middle of the restaurant. Her nimble pelvic thrusts were equal parts age inappropriate and regular inappropriate. Priceless.