UPDATE: Check out this piece I wrote on Puglia for Australian Gourmet Traveller.

Puglia is tied with Sicily as my favorite Italian region for food and it would be a shame to squander even a single culinary opportunity, so don’t cringe when I tell you: eat pezzetti and involtini di cavallu. They’re horse. Just do it. 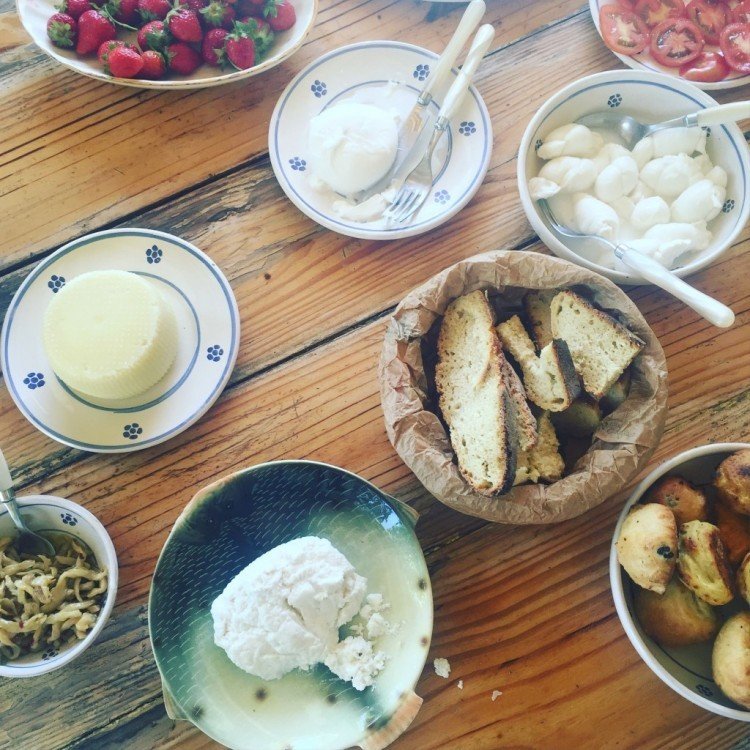 L’Antica Locanda: This place in Noci serves the most sensational seasonal food. Chef Pasquale Fatalino is intensely devoted to the classic and disappearing classics of his Valle d’Itria and refuses to compromise on food quality in this increasingly touristic part of Puglia. The antipasto misto features a parade of salumi, formaggi, olives, and vegetable dishes, while the soulful pastas celebrate the tomatoes and cheeses of Noci and its environs. Save room for grilled meat, Fatalino’s specialty.

Da Tuccino: A Temple to Neptune if there ever was one. Set on the sea just north of Polignano a Mare, this fancy fish restaurant serves some of the best pesce crudo in the Provincia di Bari. The spaghetti con le cozze are spectacular. At the end of the meal, the server comes to your table and cleanses your palate with this weird grappa spray, totally bizarre but strangely refreshing. Maybe more alcohol should come in aerosol form? Contrada Santa Caterina 69, Polignano a Mare.

L’Aratro: Most restaurants in Alberobello make their living off of the unfortunate mass tourism that has transformed the area in the past decade. L’Aratro is a welcome alternative, serving meticulously selected cheeses, cured meats, and wonderfully simply durum wheat pasta dishes. The owner is also a sommelier and prides himself on using Slow Food regonized products in his menu. Via Monte San Michele 27, Alberobello.

Cucina Casareccia “Le Zie”: If you don’t have the privilige of being invited to eat in someone’s home in Lecce, Le Zie will do. Ring the bell for admittance and you’ll be seated in one of the two rooms. Almost every table has a view into the kitchen where simple, peasant classics like fave e cicoria and pezzetti di cavallu are prepared with love. Order the antipasto misto to get a taste of Salento’s typical flavors like zingy marinated anchovies, sweet peppers, and sweet and sour zucchine. Via C.A. Costadura 19, Lecce. UPDATE: This place seems to be a bit grungier and not quite as on point as it once was.

Di Cosimo: Pizza and u’ panzerrott’ (pizza dough stuffed with mozzarella and tomato sauce and deep fried) are the specialty at this Bari landmark. Queue up for take out or wade through the crowd and find a table in the side room. Via Modugno Giovanni 31, Bari.

Lido Bianco: A beautifully sited restaurant perched on a rocky outcropping above a cove bathed in turquoise waters. At the entrance, a large display of fresh fish serves as the restaurant’s menu. Lido Bianco’s crudi (raw shellfish) are delectable but the antipasto misto di mare is on another level: insalata di mare with zucchini, smoked salmon with orange zest and pink peppercorns, mushroom and shrimp crepes…It could be a meal on its own, though try, if you can, to leave room for primo and secondo. Fish this fresh is worth the effort. Via Procaccia 3, Monopoli. 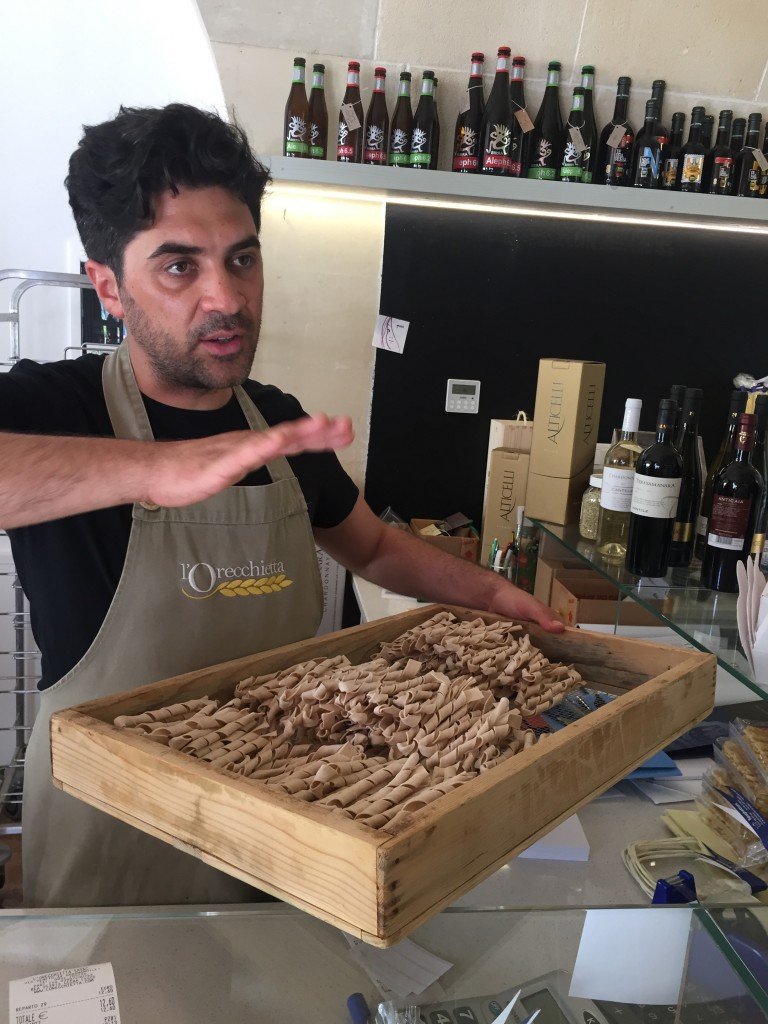 Panifico Fiore: Bread is baked in the back and served up front and, while excellent in its own right, most customers come for the focaccia. The dough is topped with tomatoes and olives (watch for the pits!) and baked in pans dosed with liberal amounts of olive oil. The result is a flatbread with a crispy bottom, a spongy interior, and sweet and salty top. Strada Palazzo di Citta’ 38, Bari.

Farmacia dei Sani: The innovative dishes at this restaurant deep in Salento’s interior are inspired by the region’s ingredients, which are elevated using modern techniques and outside-the-box flavor contrasts.

Le Macàre: This friendly trattoria serves a survey of Salento’s sea and land-based specialties, including roasted octopus with potatoes, eggplants stuffed with mozzarella or served atop creamy burrata, and ragù misto (pork and beef simmered overnight in pureed tomatoes).

Where to Drink Cocktails 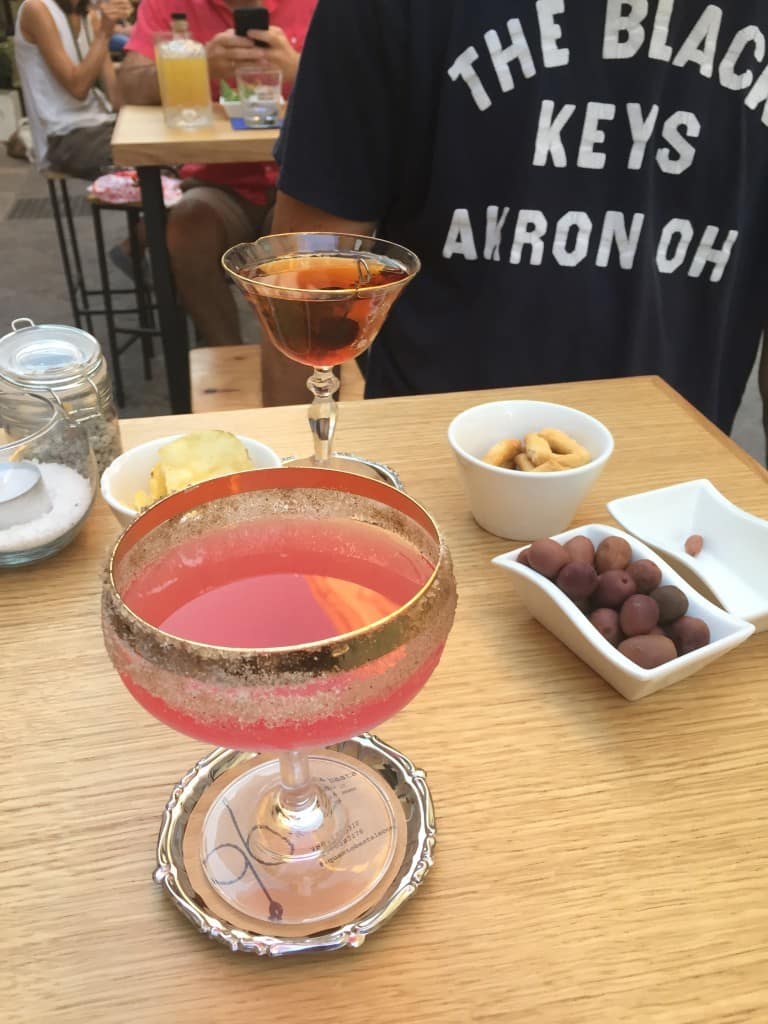 Where to Eat Sweets & Drink Coffee

Avio: A coffee shop near the Castello serving a special blend of the local Quarta coffe. Avio is an obligatory stop on any caffeine loving visitor’s itinerary. The espressini freddi are a rich summer alternative to the classic caffe’ espresso. Corner of Via Trinchese and Via XV Luglio, Lecce.

Alvino: This bar and caffe in Piazza Sant‘Oronzo is one-stop-shop for local sweet and savory snacks like pasticciotti and rustici. There are better places to find both, but Alvino offers convenient quality. Piazza Sant’Oronzo 30, Lecce.

Bar Cotognata: Leccese As the name suggests, this classic bar is renowned for cotognata, Lecce’s quince paste, but it sells a range of other sweet specialties. Viale Marconi 51 Lecce.

Pasticceria Ascalone: Founded in 1740, this institution in its 10th generation of family ownership attracts pasticiotti lovers from across Salento. Via Vittorio Emanuele 17, Galatina.

Natale: Just around the block from Alvino, this much loved gelateria serve classic flavors, as well as more creative ones inspired by local specialites. The pasticciotto and mustazziolo are unique and I’ve heard good things about the stracciatella Thai, but have yet to try it. Via Trinchese 7, Lecce.

Pasticceria Nobile: Located in San Cataldo, a run down suburb of Lecce on the sea, this hole in the wall does nice pasticciotti. They are turned out hot all day long and even in the dead of summer, these heavy pastiera cream-filled indulgences are hard to pass up. Via Marco Polo 9, San Cataldo.

Super Mago del Gelo: The inside of this gelateria specializing in granita (slushy fruit ice) looks like it was designed by Scarface’s interior decorator, but once you get past the coke den decor, pay for your granita at the register (be sure to specify if you want panna–whipped cream) then place your order with the barman. Each portion includes two flavors of seasonal, slushy bliss. In my opinion, nothing beats gelso nero (black mulberry) and mandorla (almond). Piazza Garibaldi 22, Polignano a Mare.

For more, check out the posts A Day on the Salentine Coast and Eating in Monopoli.