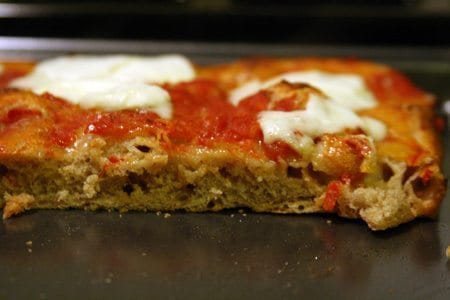 Back in January I took Bonci’s pizza class at Tricolore. It did not go well. For a number of reasons, ranging from atmosphere to organization, the experience was stressful, ridiculous, and negative. You can read all the gory details (in Italian) here. Last week I took the class a second time–this time with Mamma Parla–and what a difference! We had a great time, learned a lot, and loved the class.

For my mom’s last night in town, I decided to make her pizza based on what we had learned in class. It was a small token of my appreciation for all her help, and nothing compared to the ten days she dedicated to getting my life and apartment in order. The results weren’t terrible, but I clearly have a lot of practice ahead of me. Here’s how it went down.

I tend to improvise in the kitchen and am not really accustomed to writing recipes and cooking instructions. I am also a terrible editor, so if there are mistakes or wholes in the text, let me know. And Tom, apologies in advance for any errors you encounter! 🙂

I gathered the ingredients on Monday afternoon. I wanted to use Mulino Marino flour, but Domus Birrae was sold out of the types adapted to pizza production (0 and 1). I was too busy to get to Pizzarium to buy some, so I settled on organic spelt flour from Elite, where I also picked up some dry brewer’s yeast. 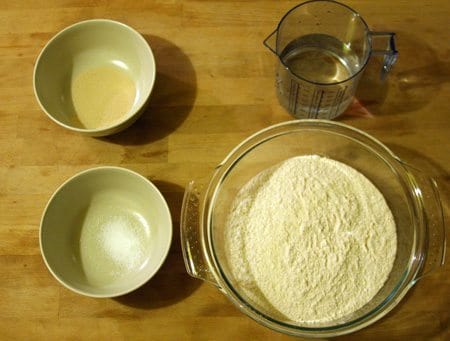 I followed the amounts we were given on our handout from class (makes 2 pizzas):

in US customary units, that’s:

NB: During Bonci’s lesson at Tricolore, we used 450g of white flour for every 50g of spelt flour. Rather than use a sourdough starter, we used dry brewer’s yeast (lievito secco di birra) and a little over 350g of water. The dough was left to cold ferment in the fridge for 24 hours, while at Pizzarium, it may rise for up to 72.

I mixed the flour, yeast, and water with a spoon, adding the water a little bit at a time. Exact quantities of water vary with the climate and humidity levels in the air. Once the ingredients were mostly incorporated, I added the salt and oil. I set the dough aside for around 10 minutes, then poured it onto a floured work surface and begin to fold.

I followed the technique we learned in class: fold the dough in half towards you, press down the ends of the dough where they meet, lift the dough by these ends and turn the dough so the seam is facing up and is perpendicular to the counter edge. (For Bonci’s technique, see the 5:20 minute mark on La Prova del Cuoco). Repeat the fold-pinch-turn technique two more times, then place dough in a bowl and let rest for 10 minutes. Repeat the fold-pinch-turn-rest process a total of 4-5 times, or until the dough is no longer tacky. Place the dough in an oiled plastic bowl and hermetically seal with a lid or with cling wrap. Place in the coldest part of the fridge for 24 hours. 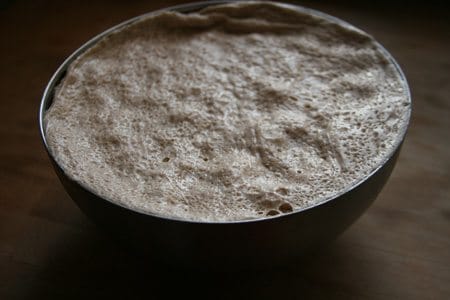 After 24 hours in the fridge, I took the dough out and it looked nice and fluffy, just as it had at Tricolore. When I took the cling wrap off, it collapsed a bit, which was discouraging. I had a bad feeling about the outcome after that.

I preheated the oven to its highest temperature. At Tricolore we used ovens that reached 280C/540F. At home I put the oven on “11”. That’s right the highest temp on my oven is ridiculous.

After the dough reached room temperature, I let it rise for about an hour. It didn’t double in size, but it did get a bit fuller. I divided the dough in half for making two separate pizzas. I brushed oil onto the baking sheet and began to prepare the dough for the first pizza.

I dumped the dough on a very well floured surface and dusted the top liberally. Using my fingertips, I pressed down the edges until the dough looked like a big raviolo. Then, I worked from the top of the dough, moving slowly towards me (check out 6:15 on the youtube link). The purpose is to shape the dough to roughly the size of your baking sheet, taking care not to destroy the bubbles in the dough, but to move them around gently. I flipped over the dough and repeated the process, making sure there was plenty of flour on the table.

Then I moved the dough to the pan (7:00 mark on youtube). Putting my arm diagonally across the dough, so it cuts across it from one lower corner to the opposite upper corner, I threw the dough from the upper corner over my arm and used the other arm to support the whole slab of dough. Using my arms (not fingers!), I gently bring the dough to rest in the pan and adjusted it very gently until it has taken the form of the pan.

Using my fingers, I distributed the peeled tomatoes (previously shredded into chunks) over the surface of the dough. I distributed evenly, seasoned with some salt and olive oil, and cleaned flour off the bottom of the pan before putting it in the oven.

I placed the pizza on the bottom of the oven. Once the bottom had become become crisp (around 12 minutes), I moved the pan to a middle rack and finished cooking (8 minutes). I removed it and let it cool. Then I put chunks of buffalo mozzarella on the pizza (I had shredded it with my hands–don’t use a knife!–and drained it in advance so it wouldn’t be too liquidy when it melted). I placed the pizza back in the oven to melt the mozzarella. Once it was melted, I removed the pan, drizzled olive oil on the pizza, cut and served. Thankfully, Mamma Parla and our guest, Jessica, liked it!

The pizza was edible, though not really anything like what I had made in four cumulative evenings at Tricolore. It also shrunk by 10-15% while cooking. Not pretty. I’m not sure the flour was up to the task, so I’ll definitely use Mulino Marino next time. I’m determined to bake an amazing pizza for Mamma Parla next time around!