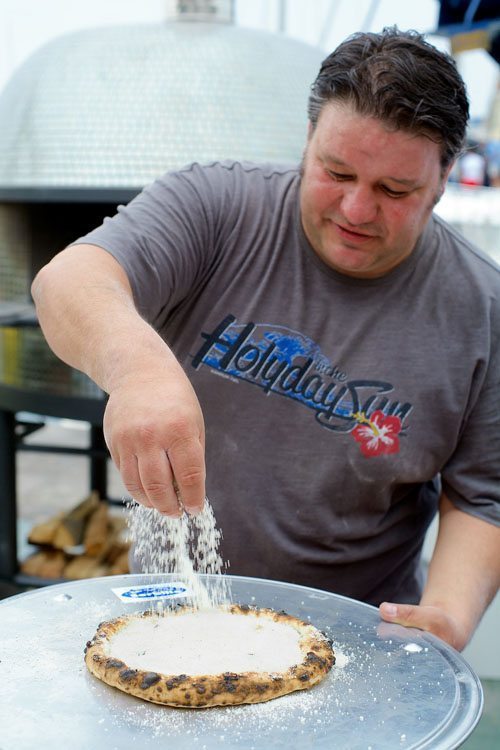 The Parla Food Proust-inspired questionnaire is back! It’s time for this blog to return to its roots and focus on the people who make great food and drink. This week, we hear from Stefano Callegari, the pizzeria mastermind behind Rome’s Sforno, 00100 and Tonda.

PF: Describe your work and how it came about.
SC: I started twenty years ago, delivering bread for a bakery. I was always with the baker because I was curious, and I asked a lot, and so I learned how to make a good bread dough. Then I started to work as a pizza maker, as a summer job, and I taught myself how. In 1995 I attended a professional pizza course for one and a half months, and I learned the techniques and understood what I had been making before. Then in 1996 I went to work as a steward for an Italian airline, and did that for 12 or 15 years, chartering around the world. But I always kept alive my passion for pizza. In 2005 I opened my first pizzeria, Sforno, with a couple of friends. There we make pizza cooked in a brick oven, like Napoli pizza. Sforno was a success in just two or three months because our pizza dough was very unique—very light and a little bit crunchy, and you could digest very well and the flavor was great. It’s still great. And also funny kinds of pizza and supplì were an appeal of our pizzeria.

Like what?
For example, pizza cacio e pepe. I was looking for a way to make this dish with pizza instead of pasta, so I needed a pizza without any other flavor, but with a wet surface— like if you eat a piece of margherita pizza and you get rid of the tomato, you find the wet dough. So I thought maybe I could use ice on top of pizza while it was cooking. I put crushed ice cubes on pizza instead of mozzarella, and the ice turns into water and then it goes away, and during that time the pizza is cooked. So you end up with cooked pizza with a humid surface, and a little bit of boiling water on top. Then I add the pecorino cheese with black pepper, and it sticks.

After 3 years, in 2008, I opened 00100. In this place I invented the trapizzino. It’s very common in Rome to stuff focaccia, to make sandwiches with ham and cheese, salami, whatever. I thought if I want to do the same, but with sauce, like all our traditional dishes, what could I do? I then I realized I could use the corner of the pizza like a pocket. This is a modern shape for a traditional food.

What inspires you?
I like walking around the streets, and what really moves me is to find good healthy food, not just healthy, but “genuino.” If I go into a pizzeria or a bar I like to find something cooked with love. I like it if a mom cooks for her child. So everything I do is like that. I like that it can be wherever you go.

What profession would you most like to try?
Actor.

What profession would you not like to try?
Anything where you have to wake up early, or anything in an office.

Who do you respect most?
I like a genius mind. When I see something that is maybe normal, but done in a genius way. For example, Quentin Tarantino. I like this way of using your mind. You give new light to things.

What is your favorite food?
Raw shrimp. And slow-cooked pigeons.

And drink?
Champagne and port.

What characteristic do you appreciate most in others?
Gentilezza. Kindness.

Would you like to add anything?
I think that there are lots of flavors that we can use in different ways, but we can also be inspired by old-fashioned flavors. I remember that in New York, and in the world, there are lots of cuisines—like Indian and Chinese—that serve you meat mixed with sauce and rice. So I thought, in our culture there is a lot of meat cooked like that with our flavors that nobody eats anymore. Why not? Instead of chicken curry, chicken cacciatore. They are both good. These dishes are almost ethnic food now, because young people don’t know them at all. So it’s like if you eat Japanese or Mexican food; old-fashioned Roman cuisine now is something exotic.