A Weekend of Wine Tastings 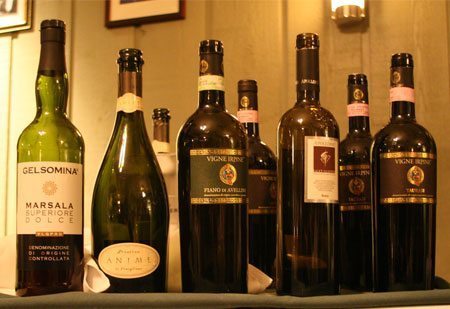 I’m still recovering from this weekend’s wine tastings and dinners. It all started on Saturday at Clydz with a dinner and sampling of some fantastic southern Italian reds: Vigne Irpine Fiano and Taurasi, Apollonio Salice Salentino, and Gelsomina Marsala. Each wine was paired with dish inspired by a recipe from southern Italy.

On Sunday I had breakfast at Gottino and picked the sommelier’s brain for a local wine shop with a good Italian selection and he suggested Moore Brothers on 20th and Broadway. I headed over there and picked out 9 bottles for my going away party at Jack’s place, Brunori’s “San Nicolo'” Verdicchio dei Castelli di Jesi, Cantina del Castello Soave Classico, and Castel di Salve’s IGT Salento “Armecolo” among them.

Before the party, I had an incredible dinner at Babbo with the restaurant’s sous chef. We got the VIP treatment and way more food and wine came to the table than we possibly could have put away, though we tried. After a round of Bellinis, we drank a Ca’ del Bosco Chardonnay with goat cheese tortelloni. The pappardelle al bolognese was paired with…uh…I completely forgot. I do remember downing a sherry with the best sweetbreads I have ever eaten. After all that I was off to Jack’s for the party/tasting. Thankfully, he lives next door to Babbo…

Tonight was the icing on the cake. My dad came to my mom’s house for dinner with his wife and we had another slew of great bottles, including Prunotto’s Barolo, and Brigaldara’s Amarone della Valpolicella Classico. Ironically when I head back to Rome tomorrow, I have far less Italian wine waiting for me.