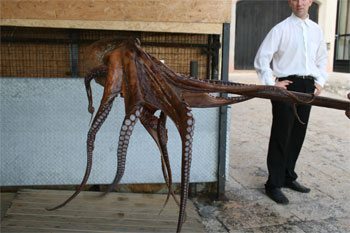 I happened to be in Tricase in November, a time when most restaurants on Salento’s coast are closed; Bolina is one of the few that remains open year-round. The port was relatively quiet, save for some commotion caused when a fisherman speared a huge squid right in his boat slip, a rare event. He even brought the still writhing squid to Bolina for the proprietor to examine but failed to make the sale. Our meal began with a warm amuse’: lentil soup seasoned with citrus and olive oil. The three appetizers that followed were excellent: roasted octopus salad with puntarelle (a type of chicory), seafood and vegetable tempura, and fish cannelloni. Next were paccheri (large tube pasta) with clams, scampi and squid. The firm pasta (more than just al dente) were ideal for scooping up the seafood and sauce.  The stuffed calamari,  overflowing with bread stuffing, chopped squid and shrimp seasoned with lemon foam, were good but not great. The best dish was the fish and fave terrine: red snapper filets wrapped around a mountain of diced eggplant and fava bean puree’. The firmness and sweetness of the fish were a perfect match for the acidic eggplant and smooth fava paste. We drank L’Astore’s  Salento IGT “Kria”, dry and aromatic chardonnay/malvasia blend.