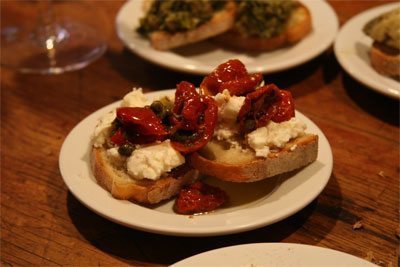 This summer, I was introduced to Gottino, an enoteca in NYC’s West Village by my friend Chris. He had worked with owner Jody Williams in her previous kitchen and, knowing both Chris and Jody had cooked in Italy, I was open to checking out this relatively new Italian wine bar. I was really impressed by the simple Italy-inspired dishes and have returned four more times this winter. I had lunch there a few weeks back, combining a bunch of the small portions (think tapas) on the menu; there are no entrees and no single item could stand alone as a meal. We tried 6 types of crostini and, though the walnut pesto was named one of the 10 best new dishes of 2008 we much preferred the crostino topped with sun-dried tomatoes, stracchino and capers. You be the judge and order them both.