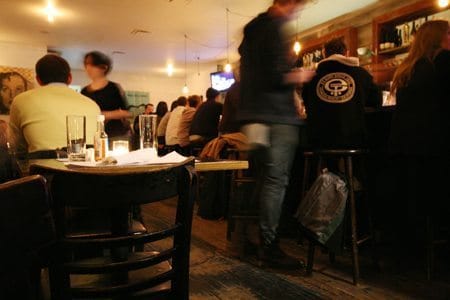 The tagline “A place for all Johnsons, big and small” might sound like a fraternity rush night event. And maybe Fatty Johnson’s is a bit on the masculine side, but this newly opened watering hole in the West Village had a pretty even johnson to lady parts ratio when I arrived with Mamma Parla and my high school friend Megan on Friday night.

Zak Pelaccio and the Fatty Crew had inaugurated Fatty Johnson’s, the newest addition to NYC’s pop-up trend, just two days earlier. The nascent joint will serve cocktails and food in the old Cabrito location for the next six weeks or so, then shut its doors.

As much as I find the notion of pop ups obnoxious (almost entirely because I find the moniker repellent), I really enjoyed Fatty Johnson. I’m a big fan of the Fatty franchise that includes the Fatty Crab and Fatty ‘Cue (where I had one of my best dishes of 2010), and I appreciate the fil rouge that links Pelaccio’s establishments: Fat(ty) goodness. 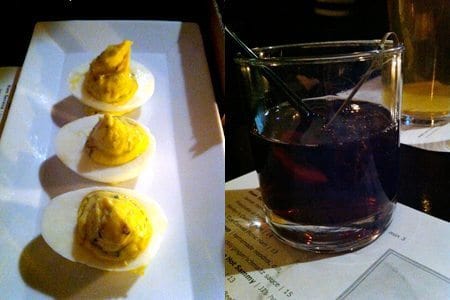 Considering Friday was a fairly full day (lunch at Ko and dinner at Keste’), we kept it light and opted for a few drinks and some Deviled Eggs, which happen to be among my favorite foods. The yolk-rich filling incorporated bits of shredded duck confit, which added some great texture and flavor. Delicious.

Every other night or so, the bartending lineup will change and guest bartenders will pour their signature cocktails. On our visit, Jamie Gordon of Plymouth Gin and Adam Schuman, the beverage director for the Fatty franchise, were behind the bar. Since I am alergic to gin, most of the cocktails were out for me. My drink of choice is generally rye or bourbon neat, but I could hardly pass up a cocktail at a place that prides itself on them, so I went for the Fatty Manhattan (ri1, smoked cherry coke, vermouths, bitters, lemon zest). It was a bit too sweet for my liking, and after a whole day of eating and drinking, I didn’t get any of the smokiness (sensory exhaustion kicked in at around the 5,000th calorie). If we had stuck around for another drink, I would have gone for a Fat and Funky (vodka with fermented sausage-stuffed olives).

We left at around 10:30, just as the bar started to fill up (with johnsons). At least based on first impressions, this place is a perfectly pleasant spot to drop in for a drink and fatty bite. Due to its transient nature and my imminent return to Rome, there won’t be a next time, but if there were, that fried chicken would be mine.

You can stay up to date on all the latest Fatty Johnson’s news, including nightly specials, on Twitter, Facebook, Tumblr, or on their oddly primitive website.