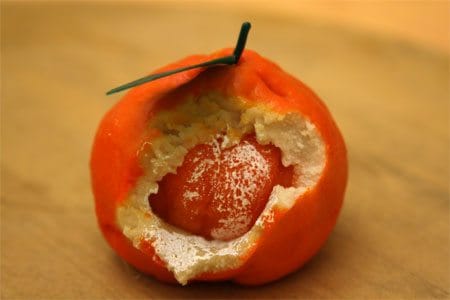 When you think of food and Christianity, it is items mentioned in the Old and New Testaments like figs, olives, fish, and bread that spring to mind. But at La Martorana in Palermo, food without a biblical precursor is synonymous with the church. Marzipan (aka pasta reale and pasta di mandorla) was formed into the shape of fruits by the convent’s cloistered nuns. Dubbed Frutta Martorana these sweets were made from a mixture of almonds and sugar, a recipe that came to Sicily in the ninth century with the Arab conquest of the island and has been produced ever since.

At first, the faux fruits were used to decorate barren trees but eventually they were sold to parishioners and became a major source of income for the church. La Martorana convent was closed in the late nineteenth century, but the tradition of the marzipan fruit lives on in Palermo’s pastry shops where it is still made, especially in the fall when the almond paste is said to be at its best and when the confection is made for All Soul’s Day. Pasticcerie don’t limit themselves to just fruit anymore. Today I bought some Frutta Martorana shaped like pane ca’ meusa, a spleen sandwich, a typical street food in Palermo. Interesting, but for me, there is nothing like the real thing.