Fulvio Bressan, The Man Behind the Wine 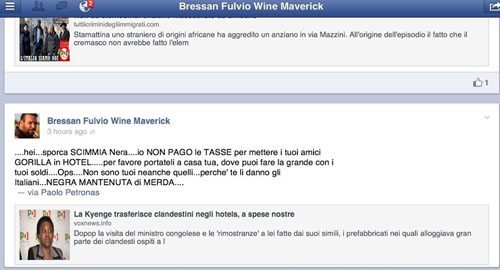 Take a deep breath and behold a disgusting rant spewed out by (to paraphrase Einstein) an infantile and diseased mind. “Hey…filthy black APE…I DON’T PAY TAXES to put your GORILLA friends up in a HOTEL…please take them to your house where you can style them out on your dime…Oops! That money isn’t even yours…because Italians give it to you… YOU SHITTY NEGRO GOLD DIGGER.”

These words are just a few of the vile racist statements directed at Cécile Kyenge, Italy’s Minister for Integration. They don’t come from some Lega Nord fan page or wig-nut Casa Pound poster. Their author, Fulvio Bressan, a winemaker from Friuli, typed these words onto his public Facebook timeline* with the same hands he uses to harvest grapes for his (until now) nearly universally celebrated wines.

His fascist and racist tendencies are not a new or recent revelation. But until yesterday, he incubated his disgusting sentiments with relatively little push back. The aforementioned Facebook post caught the attention of Glocal and, in his post entitled “Senza Parole” (At a loss for words), Giuseppe Palmieri, one of the world’s top sommeliers, expressed disbelief while denouncing Bressan’s statements.

Above is the screenshot from Fulvio Bressan’s Facebook page from which I translated the quote above. Hande Leimer sent it to me yesterday with a note: “has Bressan’s profile been hacked?” Of course, not. But such a question is natural. For us, it is incomprehensible that anyone would write or think such things. In a perfect world, someone who makes such lovely wines would be especially immune to such hate. They would share all of our open mindedness and we’d live as one big happy compassionate wine-obsessed family. But Italy is far from perfect and Bressan’s tirades are a big fat racist reality check.

I asked Hande to share her thoughts here and I hope you will share this post with anyone who imports, distributes or drinks Bressan Wines. And big thanks to Jeremy over at Do Bianchi for reporting, as well. Over to Hande:

“Can you separate the art from its artist? From the artist’s beliefs and philosophies? These age old questions just took on a very concrete meaning for me. The racism that is well known and documented in Italian soccer has, apparently, arrived in Italian wine making. And not just in the form of wine labels that feature certain fascist historic figures, which could be swept away by saying they are gimmicks and not statements pro this or that philosophy, like an Italian court has done.

The Minister for Integration, Cécile Kyenge, has been at the receiving end of many racist attacks since she took office 4 months ago. Actually, I am sure she has been subject to these for a long time now, but her arrival at the top political ranks has made these hateful acts more conspicuous. Due to my involvement in food issues, I have long seen the social, economic and political problems that arise with the many immigrants who come to Italy and are an inseparable part of the food industry by now.

Minister Kyenge’s and the government’s acts and decisions are, and should always be, subject to public debate. But the terminology used above, and throughout Bressan’s Facebook timeline is unacceptable.

As I started tweeting and posting about this on Facebook, I first didn’t want to believe. I wanted to give Fulvio the benefit of doubt. His Facebook account might have been hacked. Further exploration revealed such posts had been published over the past month. It might not be himself, but a spoof account! But, no, there were many common “friends” we had, all from the wine industry. I asked people who know him personally. And slowly, a picture started to emerge.

I posted about Fulvio’s statement on Facebook. The comments have heated up. The responses are numerous and passionate. I think the best comment came from Fulvio Bressan himself. He explains his anti-immigration ideas, all rather in a polite fashion. But his reply is totally divorced from reason and from the very essence of the offending post. He claims he is not racist and has never had any racist ideas.

It looks like you are putting words in my mouth. First of all, my statements against Minister Kyenge come from the fact that I cannot tolerate the following: to see my fellow Italians unemployed and sleeping in shacks in Reggio Emilia; the fact that people hang themselves alone in a silent garage because they can’t make ends meet; parents who don’t have money to feed their children…ENOUGH…Im sick of seeing a Minister who squanders the money and fees paid by ITALIANS and distributes them to who had never contributed anything to the nation. Also, my maternal grandfather was an immigrant and he never challenged the laws or the people who received him. I would also like to clearly state: I have never had any racist or nazi idea or biased notion against any other race. Especially those who come to Italy with a job and shelter and, like me, can be tracked and controlled by the law at any time. If this is asking too much, and if always using registered and properly paid workers…If being law abiding is a CRIME then I can accept your criticism…Otherwise, I do not accept the silly nonsense of those who want to do the politically correct thing, saying “oh the poor people” even though they do nothing for our devastated country. Proudly Italian fiercely uncompromising, Fulvio L. Bressan.

Revisit Katie’s translation of his post above. Let that sink in for a minute. Here is a person, who has just written these words (and many others of a similar persuasion) and is apparently not aware of these being racist.

He adds in a later, perhaps more candid statement:

The anger lies in seeing money that ITALIANS contributed by sweating blood in a foundry thrown out of the window paying for a hotel in CALABRIA. Meanwhile I see photos of my countrymen rummaging in the trash to find food …. or when I take food to the food bank and they tell me that their users have tripled … NO … I can not accept that. .. as a man, and first of all as CITIZEN ….. We already have enough cretins in Italy we don’t need to IMPORT them.

For me, wine is terroir. Human intervention, however minimal, is part of terroir. Thus, I can not drink a wine that has been made by someone who thinks this way. I am boycotting the wines of Bressan.”

These arguments are unhinged, illogical and rife with the tired rhetoric of that absurd affliction called nationalism. Though social media has been Bressan’s vehicle for hate, I hope it will also be his downfall. Intravino’s post calls his acts “social media suicide”. But the internet has a short memory, so the outcome is anyone’s guess. I am joining Hande’s boycott. Actually I am going even further by sharing this post with those who sell and import his wines. As a wine educator, it is my responsibility to believe fully in the wines I endorse and in the people who make them. But as a journalist and human, it is even more essential to expose hate and injustice. Even outstanding wine made with the noblest of philosophies can be ruined by it’s creators intervention.

*Fulvio’s rants are on his personal page and not that of the vineyard. Nevertheless, we are moved to share these ideas which we, and others, are convinced cannot and should not be divorced from the final product. The vineyard’s own website and publicity heavily feature Fulvio as the heir to a great wine tradition. As wine educators and journalists, we must tell the stories behind the wine, especially when they are so profoundly offensive.