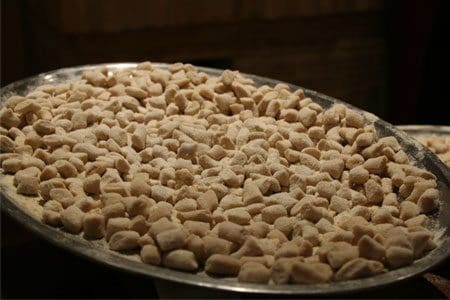 A few weeks back I joined my friend Madi Gandolfo in Umbria to harvest olives in her fields. She has her fruit pressed at Il Frantoio di Giulia in Montecchio. This olive pressing facility has a restaurant and B&B in the works so they invited us to test out a few of their traditional Umbrian recipes, including gnocchetti collescipolani, a typical dish from the borgo of Collescipoli near Terni. The recipe dates back to the seventh century according to some accounts and differs from other gnocchi recipes in its inclusion of bread crumbs.

We started by making the pasta, mixing 500g of breadcrumbs with 750g of flour on a wooden table. We made a well in the dry ingredients, to which we slowly added tepid water, kneading the difficult dough. Since the bread crumbs and flour have such different consistencies, it was a bit of a challenge to make them stick together, but with some patience and elbow grease, things came together nicely. We rolled out the dough into 1cm thick cords and cut 1cm long diagonal gnocchetti, setting them aside on a floured tray while we prepared the sauce. 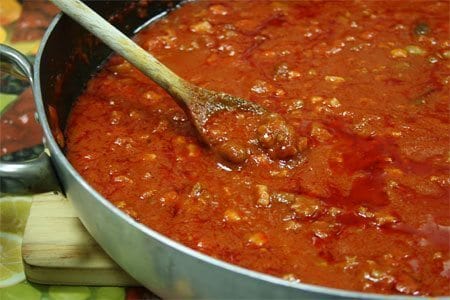 The traditional condiment for gnocchetti collescipolani is a rich tomato sauce made with sausage, tomato and borlotti beans. Like so many regional recipes, the exact ingredients and their amounts change from house to house. Il Frantoio di Giulia uses onions sauteed in a pan with oil and butter (I suspect the butter is a restaurant trick to add more flavor rather than being a traditional ingredient). To this, we added diced pancetta and loose sausage meat, cooking over a medium heat for around 10 minutes. Then we added tomato sauce, a bit of sugar, salt, and pepper and left the sauce to simmer for about an hour over low heat. About 10 minutes before the sauce was done, borlotti beans were added. 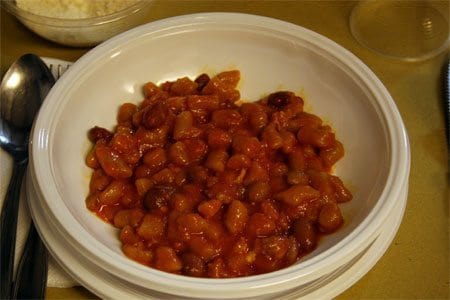 The last step was to cook the gnocchetti in boiling salted water until they rose to the top. We then drained the pasta, mixed it with the sauce, and served with grated pecorino. Il Frantoio di Giulia’s restaurant and B&B will open in the spring of 2010.