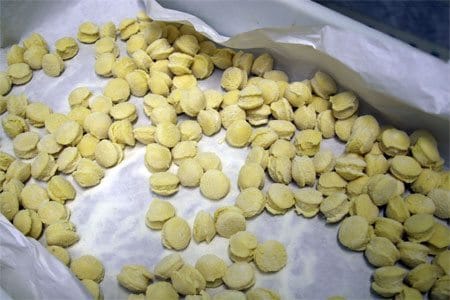 On Thursday mornings pasta shops in Rome are abuzz preparing gnocchi di patate (potato gnocchi), the canonical primo of the day. Yesterday I was lucky enough to visit Pasta Fresca Mea in Piazza Testaccio to see how they are made. Mea has been in business since 1947 and supplies many of the zone’s best trattorie with their fresh pasta. The sign on their doorway proclaims “modern methods, historic traditions”. Their pasta production is semi-industrial; gnocchi dough, for example, is mixed and kneaded by hand, then fed into a machine that cuts the dough into small pieces. The gnocchi are dusted with rice flour to prevent them from sticking together, then sold from the store’s display case or delivered to local restaurants.

At Pasta Fresca Mea, the gnocchi are made in the traditional Roman fashion, that is, with potatoes and flour (farina di grano tenero). There is often a dispute over what defines a traditional Roman gnoccho. The confusion lies in the fact that the dish gnocchi alla romana is made with flour dumplings baked with butter, milk, and parmesan. This recipe, however, is of northern Italian provenience and the alla romana bit is a misnomer.

Potatoes have been an ingredient in Rome’s gnocchi recipe for over 200 years. Though potatoes came to Europe from the New World in the 1490s, the humble tuber was largely ignored until the 18th century. By then, they were growing in many fields and trendsetting peasants in the Roman countryside begin incorporating them into their gnocchi recipes. The variety of potatoes that grow in central Italy have a low water and high starch content. That means less flour needs to be added to make dough. Less flour means less gluten, which results in a tender and enticing piece of pasta.

The recipe for gnocchi di patate is simple enough. To start, boil potatoes, peel them and put them through a ricer while they are still steaming so that as much moisture as possible is released. Let the potatoes cool, then add flour (approximately 1 cup of flour for every pound of potatoes) a little at a time until it is incorporated. Roll the dough into ropes around 3/4 inch thick and cut into small pieces. To cook, add to boiling water. When they float to the top, they are done. Serve with a simple tomato and basil sauce or with the sauce left over from cooking spuntature (pork ribs) in tomatoes.