Grano and the Selective Service Charge 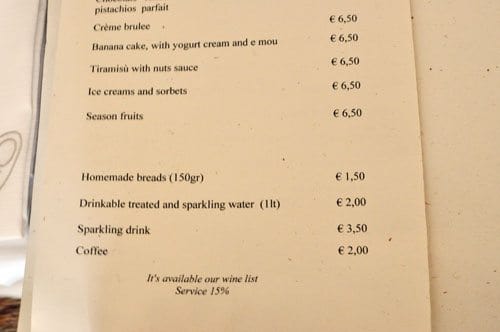 I know there’s a lot of crazy distracting English going on in the shot of Grano’s menu, but focus on the line below “It’s available our wine list”. Focus good and hard on “Service 15%”. This is the first time I am seeing that line on Grano’s menu. Because I get the Italian menu, where the phrase is absent. In fact, for Italian speakers, the whole service charge seems to disappear. Curious.

It seems that at Grano, a restaurant located in Piazza Rondanini in Rome’s historical center, service is only applied to English speaking patrons (ie, tourists). I first heard about this practice back in January when some clients of mine went there for dinner. After spending days with them and answering their questions about tipping and service charges in Italy, they were quite stunned to see the 15% service charge added to their bill. During our time together I told them, “Expect a service charge at lots of places in Capri and Venice, but in Rome only tourist traps use it.” Imagine my surprise when I inspected their bill and there in black and white, a line read, “Servizio 15%”. I was stunned. 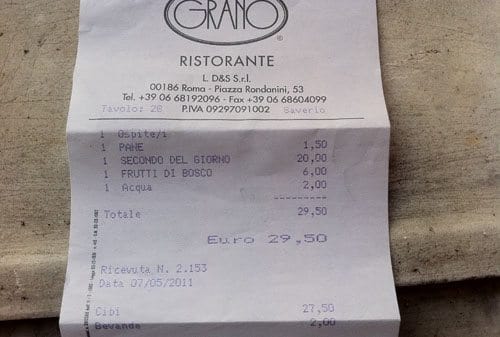 My bill from lunch at Grano earlier this month makes no mention of service.

After all, I have eaten at Grano half a dozen times since it opened and I did not recall ever seeing such a charge on my bill or mention of it on my menu. I went back to check and, low and behold, the Italian menu and bill were void of the service charge. On my way out, I asked the English speaking patrons seated near me (a well known Canadian travel writer and her husband at that) if a service charge had been added to their bill. It had. They chalked it up to eating in a touristy area and didn’t seem particularly annoyed by it.

I, on the other hand, am not so forgiving. The moment I had a hunch that Grano was selectively applying service to tourists I yanked their entry from the forthcoming Fodor’s Guide to Rome. I also surveyed other clients I had sent there to find if they had been charged service. The answers were always yes. In an email exchange, Sarah L wrote, “A service charge was added to the bill. We asked the owner if this was for the tip, and the owner uncomfortably said yes, and quickly processed the card for the bill. I don’t recall if there was a note about a service charge in the menu but the owner was adamant that it’s mentioned in there.”

The charge is easy to miss. It is cleverly tucked away on the desert page. Bravi.

UPDATE: I found a receipt that American clients gave me in the spring. They suspected they had been overcharged. That would be an understatement. Grano applied both a bread AND a 15% service charge to the bill. 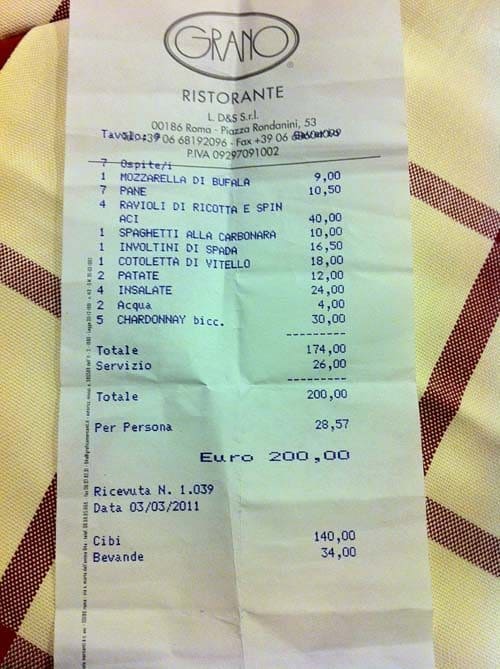