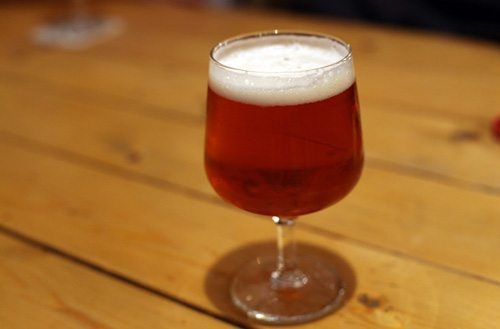 Back in the good ol’ US of A, the Prohibition era gave rise to speakeasies, also called “blind pigs”, which operated from 1920-1933. It’s hard to imagine the States under these conditions, though plenty of images hanging on the walls of Blind Pig in Rome illustrate our dry and distant history. Prohibition never made it to Italy–it only made it as close as Finland and Hungary–but Blind Pig pays tribute to these trying times when people got loaded behind closed doors in illegal watering holes. They probably didn’t drink much in the way of craft beers back then. Crap beer, maybe. And lots of gin and whiskey.

But those were simpler times and now in Rome we can enjoy a staggering selection of craft beers from all over the world. At Blind Pig that’s exactly what you’ll find. Beers on tap and in bottles come from small producers, mainly European and American, and the selection rotates regularly.

A fiver gets you a pint, there are moderately priced snacks, and there is a very reasonably priced aperitivo on Mondays. For €5, you get a pint of draft beer and an assortment of vegetarian snacks. Check it out. Blind Pig is located at Via Gino Capponi 45, 250 yards from the Furio Camillo Metro stop.