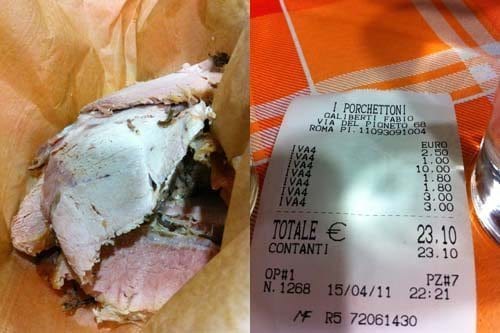 When we got the bill at I Porchettoni, Jessica and I nearly fell off our respective benches. It’s been a loooong time since we’ve paid under €12 a head for dinner anywhere, much less in Rome where an inexpensive meal is increasingly harder to come by. I had expected dinner would be cheap, but €23.10 for two people is stunning.

I Porchettoni opened at the end of February on Via del Pigneto (corner of Circonvalazione Casalina) in Rome. This is the second location; the original is northeast of Rome in Fonte Nuova. Its name derives from the word porchetta, and the place is modeled on a fraschetta, a simple tavern that serves food on plastic plates, has paper on the large communal picnic tables, and supplies just a single glass for water and wine. 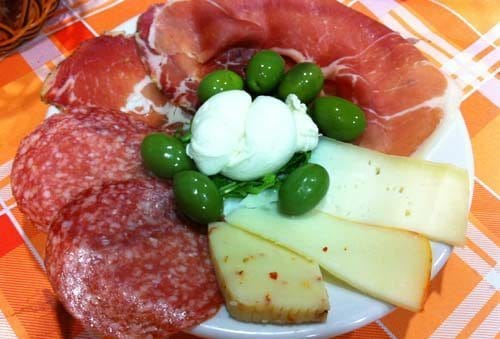 Porchetta and fraschette are the symbols of Ariccia, a hillside town just outside Rome. Porchettoni’s atmosphere takes a page from Ariccia’s playbook and manages to duplicate the food of the town very well.

The service is very informal and there is no written menu. The servers rattle off the day’s specials, composed mainly of traditional dishes. The menu may vary from day to day, but the classic fraschetta starters are always available: fresh mozzarella, salami, olives, grilled vegetables in olive oil. We ordered these mixed appetizers and also got the seasonal starter, corallina on Easter bread, a rustic contrast of savory and sweet. Of course, we also ordered some porchetta, which was sliced off a huge roasted beast and delivered to the table wrapped in brown paper. 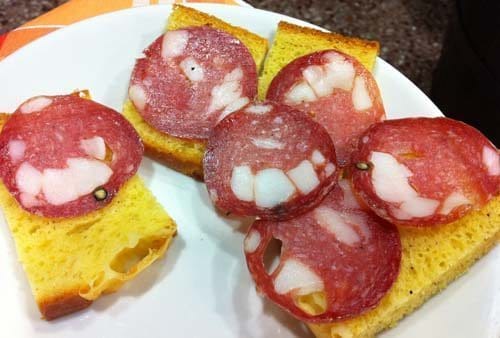 For her first course, Jessica had pasta all’amatriciana, while I had fettuccine with meat sauce. Our abundant servings of pasta were served in big plastic bowls. Though I was very tempted to try their spezzatino, we skipped the second course and each had an amaro and ciamballine al vino instead. Then the near-bench-falling ensued.