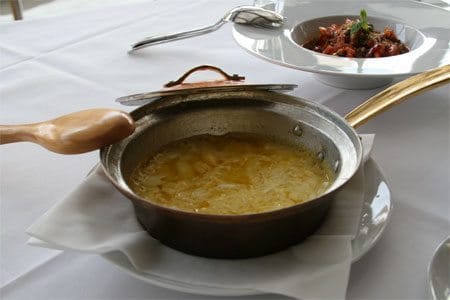 Since moving to Italy, I have been acutely interested about what is eaten in each region and why. While I usually focus on the similarities between southern Italian cuisine and that of North Africa and the Eastern Mediterranean, it had never occurred to me to ponder the food of the Black Sea. However, in Trabzon in northeastern Turkey, they eat a sort of polenta called kuymak. It has been made there since the Venetians dominated the commercial ports of the area almost 500 years ago. Its amazing to think how far that corn had to travel to land in Trabzon: across the Atlantic from the New World Spain, then onward to Venice, and ultimately to the Venetian outposts in the Eastern Mediterranean, the Balkans and Eurasia. Kuymak is made with a gooey cheese reminiscent of fontina. A taste of northern Italy on Turkey’s northern coast.