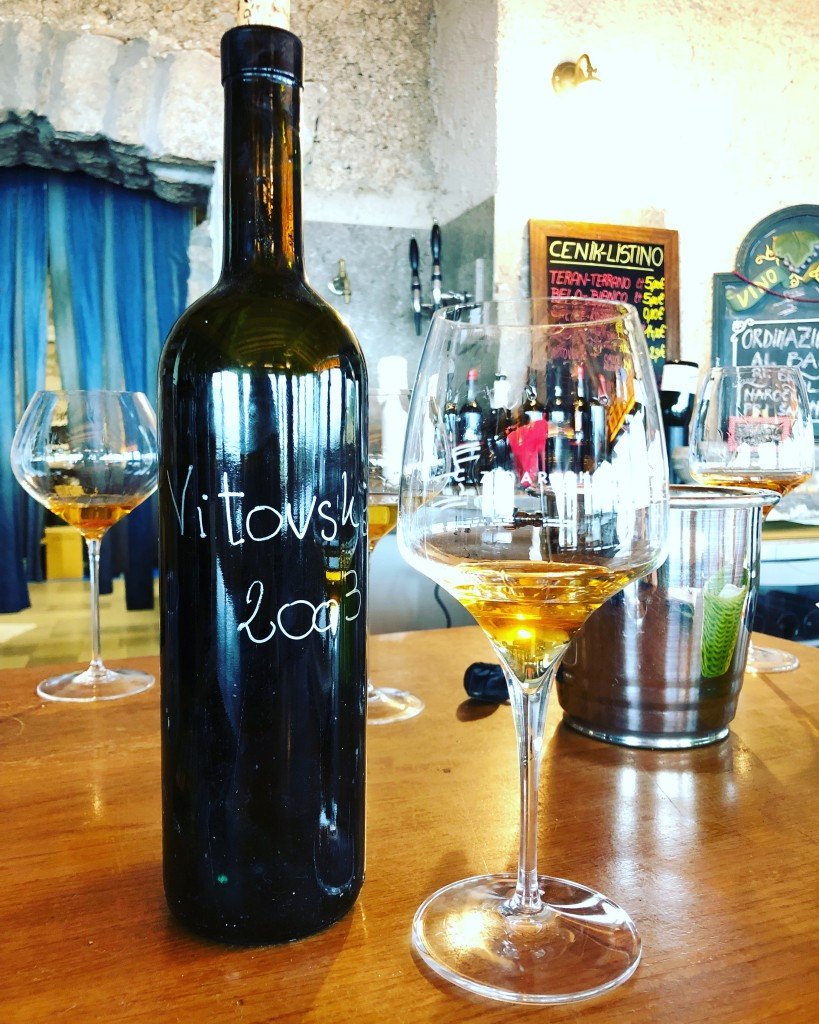 Text below from Imbibe’s Travel Issue (remember travel?). Anyway, thought I’d share some inspo for whenever it’s safe to travel in Italy. Osmize are open on a rolling basis year round so there’s one for every season!

The Osmize of Friuli, Italy

Friuli was a contested region for the bulk of its tumultuous history, as its strategic location in northeastern Italy bordering Austria and Slovenia made it ripe for conquest. These days, it’s under Italian rule—though its regional government operates with relative autonomy—but that’s done little to diminish the fierce regional character of the place, which itself has proud and historic sub-regions. “The Carso has nothing to do with Friuli. It’s its own thing,” declares winemaker Benjamin Zidarich, asserting the uniqueness of his native region during a visit to his cellar.

It’s not a controversial claim; Italy’s 20 regions have countless sub-regions of their own, each with distinct character, culture and customs. Naturally, their respective winemakers are eager to point out the climactic conditions and topography that set their territory apart. In this part of Friuli, it’s not just the weather and terrain that’s unique, but a way of consuming food and wine that dates back centuries: the osmiza (spelled osmize in plural), a sort of pop-up rustic tavern on a working farm or vineyard.

The arrival at the Zidarich vineyard offers the first hint at the Carso’s singular nature. To get there, I followed a series of switchback roads from Trieste on Italy’s Adriatic Coast up to a steep plateau straddling the Slovenian border. Even in just a matter of kilometers, the terrain changes dramatically, from seaside plains to pine-studded hilltops. The roads rising out of Trieste are the ones that drivers unaccustomed to manual transmission loathe: the narrow lanes always seem to be crowded with traffic at the exact wrong time—think steep, hairpin turns—and there are stoplights around blind curves. It’s a harrowing but worthwhile vertical climb that gives way to vineyards, pine forests and grazing land punctuated with minuscule, centuries-old villages. Benjamin Zidarich’s vineyard is located in Prepotto, one such hamlet. There, nearly all the homes are built from hand-hewn stone and accommodate multiple generations behind their fortress-like walls. These familial compounds face onto central courtyards stacked with firewood for the furnaces and fireplaces.

Beneath the courtyard, Zidarich has excavated 13,000 square feet of cantina space laid out on several levels. As I stand with him in his cellar more than 65 feet below ground level, droplets of water cling to copper-colored stone walls, while roots from thirsty vines six stories above poke through small cracks in the rock. Vats of wine—whites made from Vitovska and Malvasia grapes, and reds made from Terrano, called Refosco elsewhere in Friuli—fill barrels along the walls. Some ferment in a pair of large limestone containers the Zidarich family has been experimenting with, a sort of twist on the amphora, using colossal pieces of locally quarried stone instead of kiln-baked terracotta jugs.

The dimly lit cellar is one of many in the area where making wine in caves goes back to Roman times. “The Carso has a lot of free grottoes,” Zidarich says, referring to the natural caves that riddle the area, attracting spelunking fanatics from all over the world. “This isn’t one of them.” The cantina was a dozen years and about €1 million in the making. The investment allows the family to have full control over their space, while also keeping it local, a major benefit in a small business like theirs.

At this great depth, in the absence of sunlight, and in relative isolation, it’s easy to imagine a winemaker losing contact with the outside world. But the Zidarich family credits their osmiza with keeping them in touch. Indeed, during each of the three osmize the family hosts throughout the year, hundreds of visitors come to eat and drink in their large, wood-accented dining room overlooking the vineyards and the broad crescent of the Gulf of Trieste. It’s hard work juggling an osmiza on top of the winemaking, but they’re dedicated. “It’s our tradition,” he says, “and we have kept it going.” 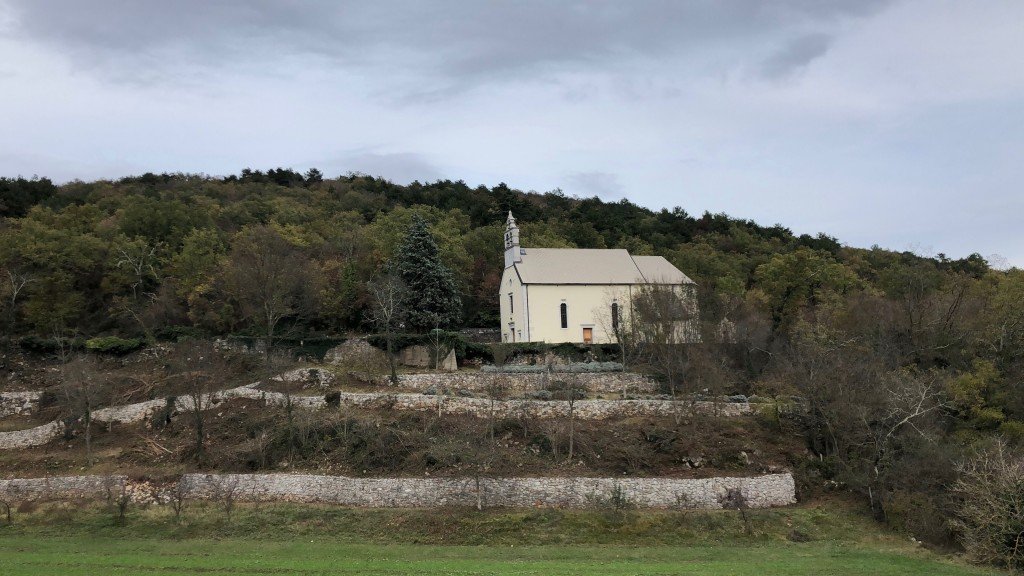 Locals will tell you that the Carso’s osmize date back to the time of Charlemagne, but there’s not a lot of concrete evidence connecting them to the 8th century. Instead, osmize were established in 1784, a time when the Carso was under the reign of Joseph II Habsburg. The king permitted farmers to sell their products directly to consumers, tax-free, for eight days each year—the word osmiza comes from the archaic word osem, or eight. Each osmiza had to register its presence in a community with a hanging branch called a frasca (some might recognize the name from a Friuli-inspired restaurant in Boulder, Colorado. Their book, Friuli Food and Wine is available now). Though you can now track down osmize, which have staggered openings throughout the year, at osmize.com, frasche are still used as signposts; fresh branches indicate an osmiza in progress.

Although the Habsburg Empire is long gone and the region has been part of Italy since last century, the area still clings to its pre-Italian customs for, among other reasons, economic necessity. “There are still around one hundred osmize in the Carso, and since people come to eat and drink and buy wine directly from us, the money comes in right away,” Zidarich says. This eliminates the inevitable invoicing headaches and payment delays that winemakers in the Carso and beyond have to contend with. But when it comes to osmize, the appeal isn’t purely economic—it also serves a critical social function. “We can get close to the customer and give them the kind of attention they need,” he says. “It’s just not possible to have visitors every day, so the osmiza is a way of concentrating the visits.” Plenty of people do come to the Zidarich osmize during the concentrated periods of the osmize.

Every year in March, June and December, the Zidarich osmiza functions for around 12 days—they’re no longer bound to the Habsburg-imposed 8—serving à la carte portions or mixed plates of prosciutto, lardo, salami, cow’s milk cheeses and cured vegetables. The meat is dutifully sliced by hand by Zio Romano, Benjamin’s uncle. Local olive oil is drizzled over bread and cheese and fresh cow’s milk cheese, made less than a mile away, is served with wild fennel honey. Visitors can choose items from a chalkboard menu listed in both Italian and the local dialect, and there’s no minimum purchase, so diners and drinkers on a budget can have a glass of wine and a snack for around €5, while those of means can drink magnums of Vitovska, Malvasia and Terrano paired with lavish meat and cheese spreads.

Though the Zidarich name is well known outside Prepotto for elegant, age-worthy wine, locals met the Zidarich family in a more informal context when they first opened their osmiza more than 40 years ago, decades before they entered the wine trade. The family has only been bottling wine for commercial sale since 1988, but before that, they served rustic vino sfuso (jug wine) alongside a menu not unlike the one they serve today. Back then, Benjamin’s grandfather raised his own pigs, which would be slaughtered and transformed into aged salamis, fresh sausages and whole-muscle cures. As a nod to this simpler time, Zidarich makes a jug wine that’s only served at the vineyard during the osmize periods. The vineyard is the only place where limited quantities are available. 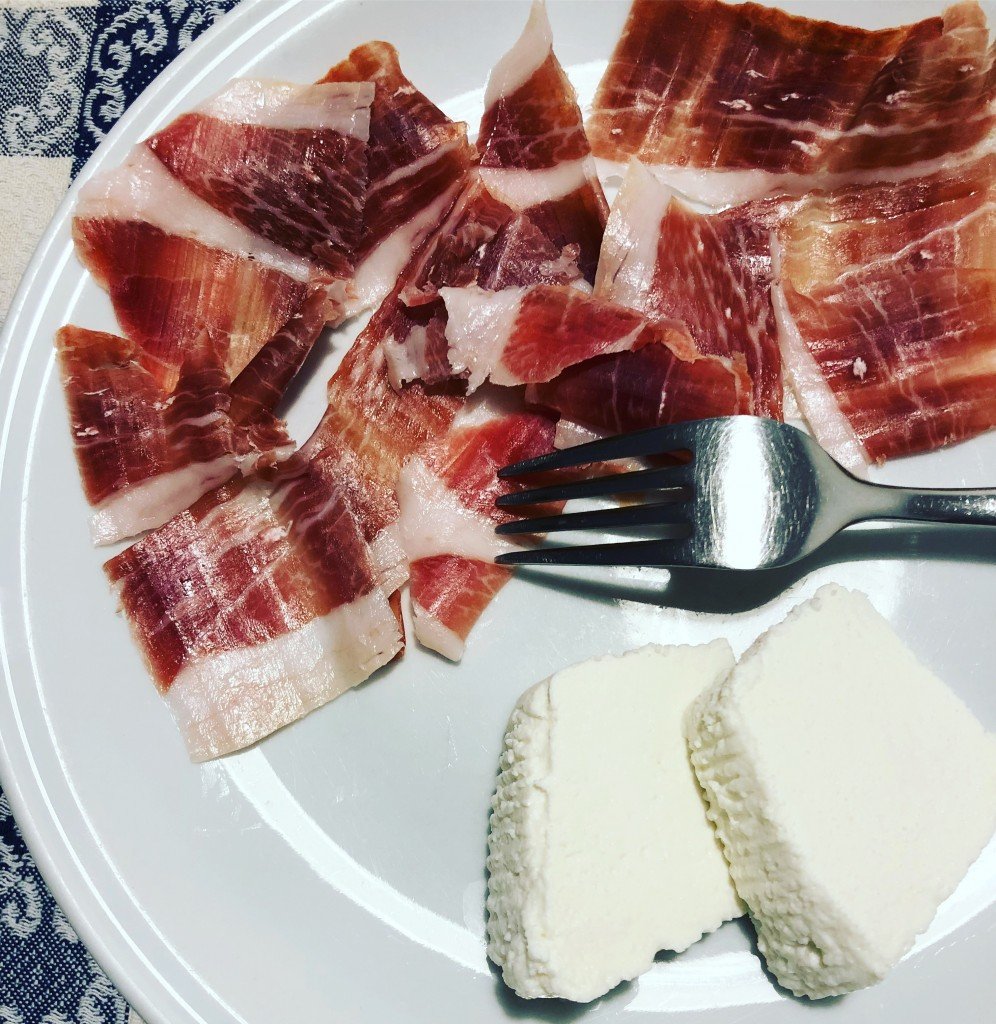 Leaving the Zidarich osmiza, which faces onto the family home and courtyard, I exit the property through large carved wooden doors, a common feature in the Carso thanks to its dense forests. A hundred feet away, the Skerk family home and osmiza occupy a stone courtyard. Unfortunately, it’s never open at the same time as their down-the-street neighbor. Inside the osmiza, which doubles as the vineyard’s tasting room when the osmiza isn’t running, there’s an oven built directly into the stone wall. It’s there that Maria Skerk, mother of the vineyard owner Sandi, cooks her famous cotechino nel pane, a fat-rich pork sausage baked into bread dough. While the Zidarichs focus on cured meats and cheeses, the Skerk family serves a more extensive menu, relying on their oven, especially for sweets like crostate (jam tarts), ricotta pies, and strudels. The menu dates back to 1960 when the Skerks first opened their osmiza to sell their own pork products, long before the modern vineyard was born. For diners hungry for simple fare or just cheese, there’s plenty of that, too, like Jamar, a cave-aged cow’s milk cheese made half a mile away, which the Skerks serve with honey.

The Skerks find a similar pleasure in hosting their osmiza. As I walk with Sandi from his home to his cantina nearby, he echoes the need for direct contact with his clients. Making wine in caves is challenging work, and descending into a cavern in the side of a hill to move bottles and barrels on several levels is laborious. Inside his cantina, Sandi walks among stacks of bottles at rest before their imminent shipments around Italy and abroad, eager to show off a new sparkling wine, an old-school Prosecco that will be released next year and will debut at a future osmiza. We descend to a lower level where wooden, steel and stone tanks trim a cavernous room. A grotto 75 feet underground delivers a current of chilled air. I imagine Sandi’s mother, Maria, grating kren (a root similar to horseradish) over braised pork shoulder, offering a warm and hospitable break from the darkness and cold. When asked what he sees as the future of the Skerk osmize, Sandi says “We do this because it’s our tradition. It’s not easy work. We’ll see if my sisters want to keep it alive.”

Alitalia and a handful of budget carriers offer direct flights to Trieste from Rome, Milan, Naples, Bari and Catania. Trains arrive from all over Italy, and there are car rental agencies at the Molo IV building in the Trieste port, just a short walk from the train station.

Rent apartments with full kitchens at Agriturismo Skerlj where siblings Kristina and Matej Skerlj take a break from making stellar natural wines to welcome visitors to the Carso.