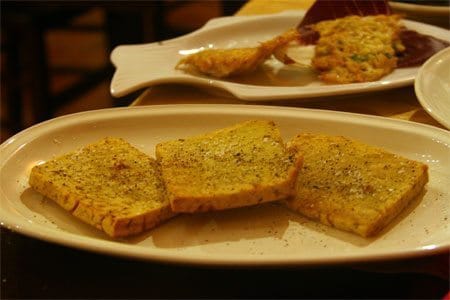 Panelle are deep fried chick pea fritters, a starchy combination of chick pea flour, water, herbs, and salt that are found widely in western Sicily. I first encountered them in Palermo’s Ballaro’ market where flat, rectangular slices are fried in large vats of oil and served on a semolina roll. Panelle are among my favorite Sicilian street foods and I never pass up a chance to eat them, even when these opportunities arise in slightly more formal settings than the chaotic markets of Palermo. Last week during a quick trip to Sicily, I ate at Osteria Le Tre Salette, a common haunt of mine in Trapani. There, the panelle are served without bread and are liberally seasoned with wild fennel, salt and pepper. They were dense, starchy, and full of flavor, a wonderful way to start a Sicilian feast.