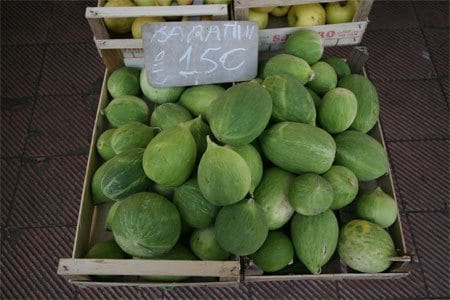 Whenever I visit a new place, one of the first things I look for is the local market. As I was walking the streets of Monopoli (Puglia) yesterday, I came across Piazza XX Settembre where the fish and produce market offers the freshest catch from the Adriatic Sea and seasonal fruits and vegetables from the surrounding farms. I recognized the local onions (lampascioni), fresh fave, and artichokes piled high at the vendor’s stalls, but was pleasantly surprised to find something I had never seen before: scattoni. They look like mini-watermelons but I was told they are similar to cucumbers. In fact, they are called cucumber melons in English. At the market they were labeled barratin but locals call them scattoni. Whatever they are, they perfectly embody the regional and seasonal nature of the cucina pugliese. And what’s more, they attest to the foreign influence on the local cuisine; cucumber melons are similar to crops found in Egypt and are thought to originate Middle Asia and Asia Minor–Puglia was once under Greek and Arab control. Once again, a single type of produce becomes a history lesson.