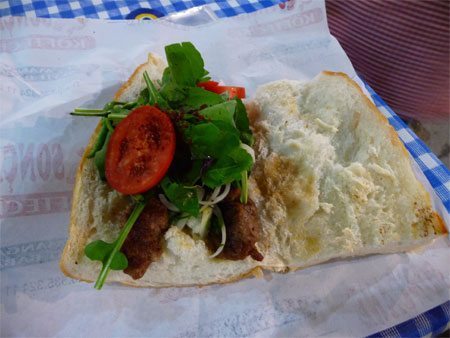 Son Çare means “last chance” in Turkish, a name that seems unrelated to a shop selling köfte (grilled meatball) sandwiches. According to the rumor mill, the owner of Son Çare was a very rich man, then suddenly lost all his money. In order to support himself he had to start over. He built a cart and borrowed meat from the butcher and grilled meatballs on the street in Antalya, repaying the meat at the end of every day. Slowly but surely he made a name for himself and was eventually able to rent a small shop near Antalya’s clock tower. After continued success, he launched a larger shop on the cusp of the old city, on the west side of Dönerciler Çarşısı (a large steet food complex). The man had made good on his last chance.

My experience Son Çare was weird. Usually I am the one sticking my camera in people’s faces at restaurants but this time, I was the subject. The server took my drink order (water and ayran, of course) then took out his cell phone and took a picture of me. I asked him what he was doing, but that is about as far as I got. My food related Turkish is flawless but everything else is a mess. If I wasn’t so hungry, I may have argued with him, but I didn’t want to risk losing out on Son Çare’s famous köfte. And hell, if he wanted a picture of a sweaty American on his Nokia, who am I to stop him? In my defense it was 40 degrees at 11pm! Only Italians don’t sweat at that temperature. Fact.

A few awkward moments later, I was beckoned to the salad bar, and a huge köfte sandwich was stuffed into my hands. I was instructed to fill it with whatever I wanted from the salad bar and I set out sprinkling my sandwich with sumac, red pepper flakes, onions, tomatoes, and arugula. While we may have gotten off to a bumpy start, this sandwich made everything better between the server and me. Plus, every time he would come over and ask me which pension I was staying in, I could shove the sandwich in my mouth and politely rebuff him. Overall, a delightful and useful sandwich. With ayran and tea the bill came to 5TL (2.50 euros).

Involtini alla Piazzetta: A Recipe for Easter from the Heart of Campania

Italian Gift Guide For the Holidays…Or Any Time!