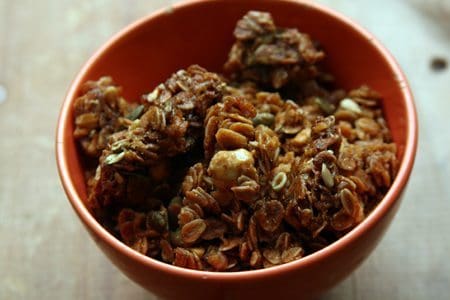 Back in the fall I interviewed the lovely Fergus Henderson and Trevor Gulliver about their newest venture, the St John Hotel, which, at that time, was slated to open in London’s Chinatown in November. Then the opening date was moved to December. Then it was scooted back to January. Now a late March or early April inauguration are being bounced around. You can read more about the probably soon to be opened hotel here.

In addition to guest rooms, The St John Hotel will have restaurant and bar that serve food from 7am until 2am, providing meals and snacks to guests and outside patrons alike. Though we will have to wait months for a proper meal at the new St John, you can get in on its tasty treats right now. Simply swing by the St John Bakery on Druid Street (arch No. 72) on Saturdays from 9am until 4pm and you can pick up the new granola clusters that will be served at the St John Hotel’s breakfast. A 350g bag costs £4 and contains a rich and sticky mix of toasted hazelnuts, oats, pumpkin seeds, and sunflower seeds. It may be a gustative hallucination, but I swear there is something herbal in there, perhaps some dried mint? Try it for yourself and be sure to get to the shop early so you don’t miss out on St John’s famous creme donuts!