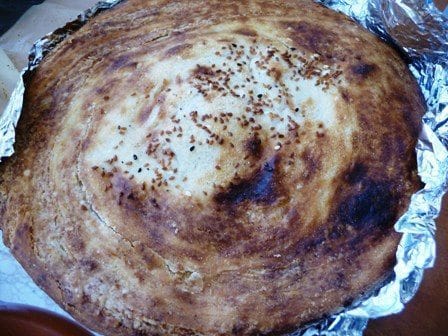 Ramazan (the name for Ramadan in Turkey) started on August 19. For the preceding 2 weeks, I interrogated everyone I encountered about their Ramazan food memories. I wanted to know what recipes and dishes people associate with this month of fasting. I think most non-Muslims immeditaely think of Ramazan as ritual fasting alone, overlooking that food and feasting are a huge part of the holiday. There are countless dishes that are only prepared during this month and served before the first call to prayer in the morning and to break the fast in the evening. Of all of Ramazan dishes I head about, I was most interested in tahinli ekmek (a sweet bread made with tahini).

You may already have read about my love of tahini helva, and this new use of sesame paste was intriguing. It would not be until the day Ramadan started that I would see this magical spiral flatbread in a bakery in Ürgüp, Cappadocia. My friend Susan had driven me there to take the bus to Kayseri and we had an hour to kill before my departure so I suggested trying out a bakery I had seen on a previous visit. The bakery was in the bus station square, which in my mind, doesn’t scream quality. But then again, my impressions of bus stations were shaped by the Port Authority in NYC, one of the scariest places on the planet. In Turkey, it is different. This place was proof.

A half-dozen bakers worked at the stone oven making pide for a huge crowd of customers. I was thrilled when I saw a flat flakey spiral bread piled high on a table near the register. Could this be it? I enquired “tahinli ekemek mi?”. Hypothetically, this means is this tahini bread? At least that’s what I think it means after 10 Turkish lessons, but I must have gotten close enough because the cashier responded. Evet, yes. We ordered our pide, baked to order, and I picked at the sweet tahinli ekmek as we waited. The oil of the tahini and the flour make friable glutinous bonds that flake easily and you just pull a bit of the bread and it crumbles lightly between your fingers. It is best eaten by biting into it rather than tearing, but I really don’t discriminate against either method.