The Day I Ate Ravioli in a Toyota Dealership 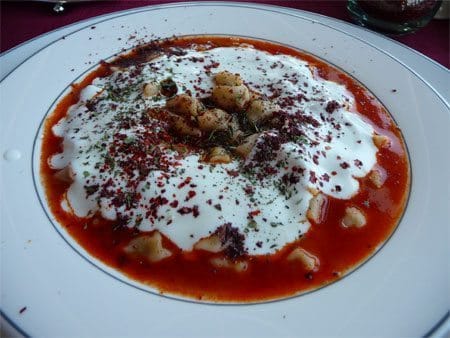 It took nearly two months but I have finally managed to overcome technical difficulties and upload the last of my photos from my month in Turkey. This has facilitated several trips down memory lane, one of which brought me back to Kaşıkla, a restaurant in a Toyota dealership in Kayseri famous for its mantı (Turkish ravioli). Now where I come from, there is a Joe’s Crab Shack next to the Toyota dealer and you wouldn’t catch me eating there if it was the last chain restaurant on earth. But in Turkey, you can find incredible food in the most unexpected places. So when I heard about Kaşıkla, I was intrigued and determined to go.

I arrived in Kayseri mid-morning and had to visit museums, restaurants, hotels, and the tourist office for the Rough Guide to Turkey update. I figured I had plenty of time to cover all of these things and grab a plate of mantı at Kaşıkla and be on the 7pm bus to Antakya. Things didn’t go exactly according to plan. After checking out most of the spots I had intended to see, I visited the city’s ethnographic museum. A young software engineer and her two friends latched onto me and would not let go. The girl was excited to practice her English which was much much worse than my pitiful Turkish, so a lot of awkward silences filled our trip through the museum together.

I attempted to extricate myself from the situation, tried to explain I was working. No dice. In ordinary circumstances I would have been happy to drink tea with them and practice the 9 Turkish words I have mastered. But I was on a deadline and most important of all, they were not hungry and I needed mantı.

I managed to explain that I had to make a bus and that if I didn’t eat meat dumplings slathered in yogurt at Kaşıkla I might die and my blood would be on their hands. That is not entirely true. I did not effectively communicate the last bit. But they knew I had to make a bus so they gave me a ride to the terminal (Kaşıkla and Toyota are conveniently located next door). When I got out, they followed. I led them past the car showroom and into the restaurant, ordered my mantı, sprinkled them with sumac, crushed red pepper, and mint and got down to business. They drank tea and watched in awe as I polished off a good half-pound portion in 90 seconds.

At 6:50pm, I paid the bill committing all sorts of horrible faux pas by picking up the check when they insisted on paying. Eight minutes later I was on an Antakya-bound bus waving at my new acquaintances, wondering what impression I have given them. I hoped that I was not a horrible cultural ambassador for America, a nation famous for its overeating and lavish spending, but then decided that I was. Another day well spent in the pursuit of great food at all costs.