The Journey To, And Through, Syria 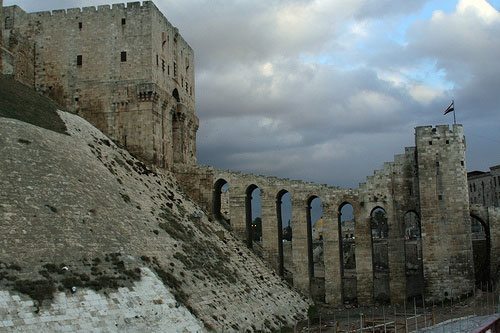 Last week’s trip to Antep stirred up all sorts of memories for me. I first visited back in 2008. In fact, I even stayed in the very same room at the Anadolu Evleri. Four years ago, I used Antep as a point of departure for a solo trip to Syria; its airport was close to the border crossing at Kilis. At the time, I had never been to southeastern Turkey (or Syria for that matter) and I had no idea what to expect. I only scheduled a day and a night in Antep and after about nine seconds in town I realized that was a huge mistake. The city merited weeks. But I had to stay on schedule and after a good night’s sleep, I took a bus to Kilis, or more accurately, to a completely dilapidated bus station near that border town. 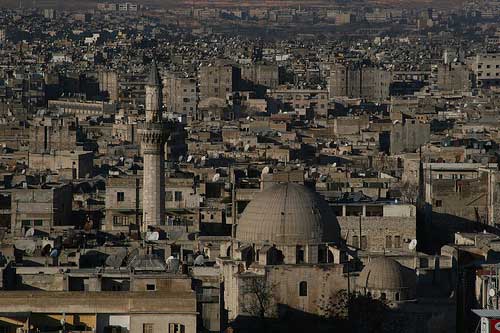 Aleppo seen from the citadel.

When I got there, I entered the first open office and tried my best to ask for a bus into Syria. My research told me there were several buses a day that drove down to Aleppo. My luggage was whisked away as I handed over some money. A few minutes later a car with blacked out windows and a possible gas leak pulled up and I was instructed to get in. I had a moment of panic but then decided to go with it. If my luggage was gone, I’d live, and if I was in a dangerous situation, there wasn’t much I could do about it at that point. So I just relaxed, tried not to asphixiate on the fumes that were pouring into the car, and hoped for the best. Only when we got to the border did I fully understand I had hired a private driver to take me to Syria. All for the cost of around $25. 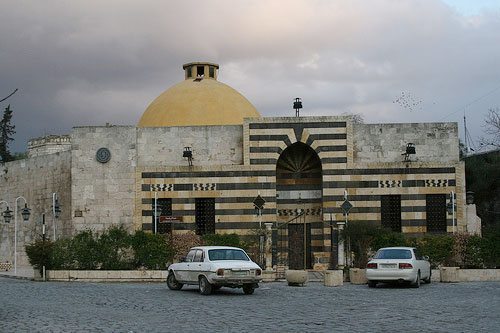 At the border, my luggage emerged from the trunk of this truly terrifying vehicle and I was passed off to another driver in a brand new SUV. Talk about an upgrade. He drove me to Aleppo and dropped me off in the center of town. The whole thing was totally weird and unfamiliar but I kept my cool and found a hotel near the souk. 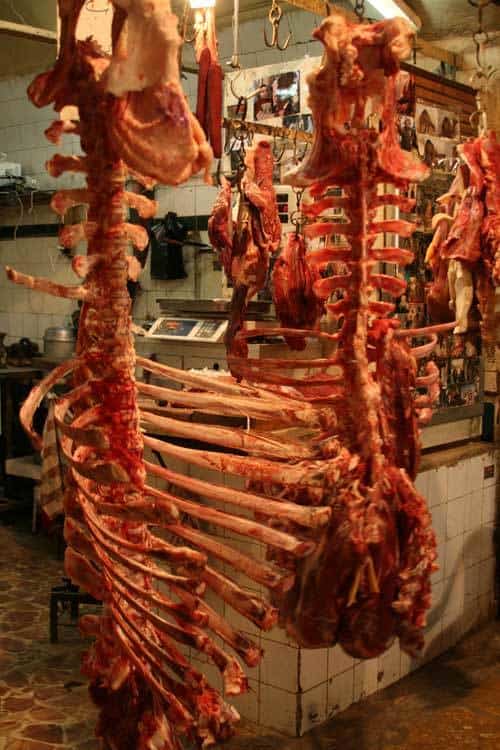 A butcher in Aleppo’s labyrinthine souk.

I spent the next four days wandering through Aleppo, exploring its expansive marketplaces and covered bazaars. From the citadel I marveled at its sprawling, monochromatic urban development. 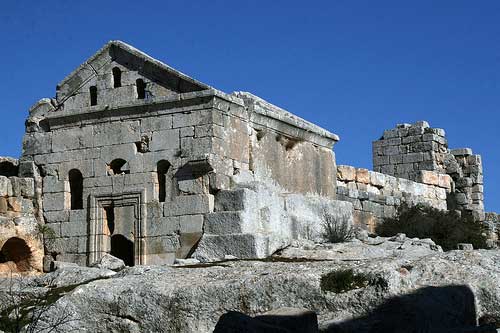 A dead city near Aleppo.

From Aleppo I took a day trip to the Dead Cities. I arranged for a driver to take me to a number of these abandoned ruins, which were thriving towns during the Byzantine era. Today, their walls are littered across the sparse countryside and many buildings are used as shepherds huts, stables, and even hovels. 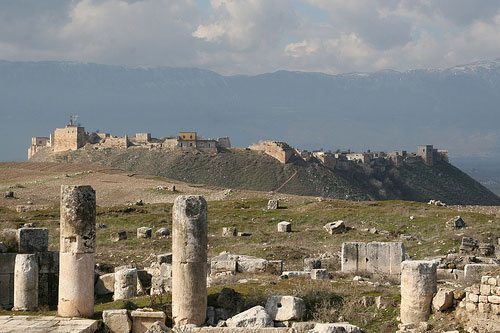 The next stop after Aleppo was Apamea, an ancient Seleucid (then Roman, then Byzantine) city that today sits in ruins near the border with Lebanon and Hatay. This leg required a driver, as well. I must sound all fancy being chauffeured around Syria, but it didn’t cost much and, considering I know next to no Arabic, this was the safest way to travel to these remote districts. 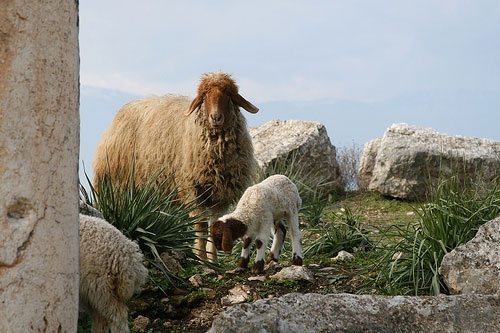 Stop looking at me!

Apamea is one of the craziest places I have ever been. The ruins sit in the middle of a field with modern Apamea and a mountain range in the distance. The place is piled high with sheep dung and shepherds graze their flocks along ancient main street and among the ruins of temples, baths, and shops. The driver, a shepherd, and I were the only human visitors that day. 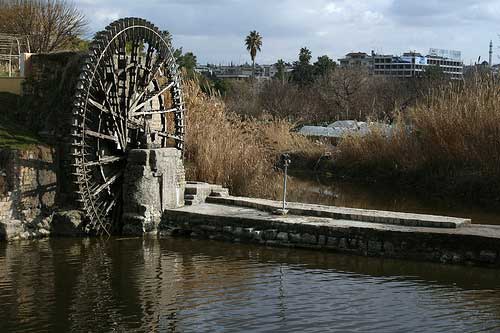 That night I stayed in Hama, a town famous for its norias, or massive water wheels. They creak and moan and make the eeriest sounds as they turn. Bizarre. 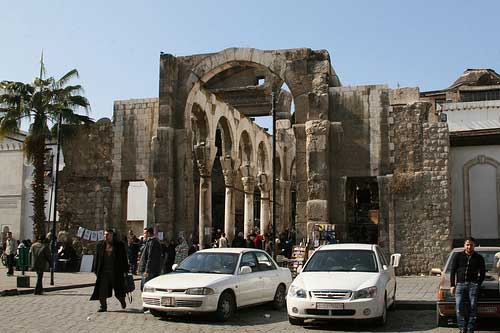 The next few nights were spent in Damascus, which has an amazing archeological museum and a busy souk. After a couple of days of wandering and breathing filthy air, I needed a break and hopped on a bus to Palmyra. The schedule said it would take a few hours, but the driver went like 200km an hour and we were there in a little under 2 hours. 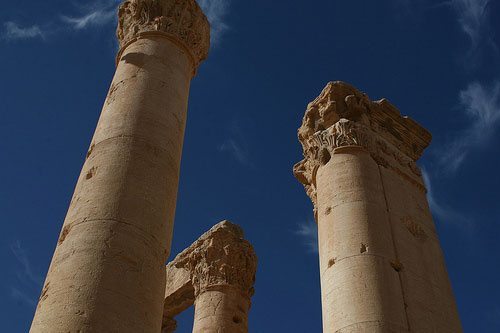 Columns in the ancient Roman city of Palmyra.

Palmyra is the most famous ancient city in Syria and it was surrounded by luxury hotels and lots of souvenier vendors. There were even dudes selling camel rides. So, basically the opposite of Apamea. 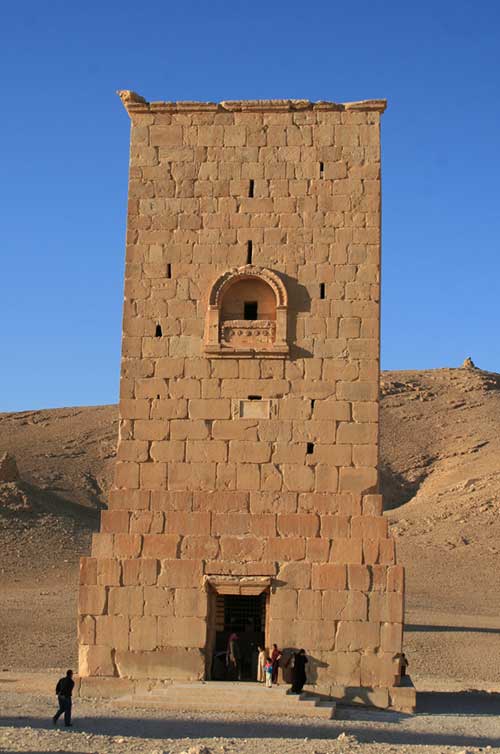 I hung around until sunset when the other visitors had retreated to their hotel jacuzzis and strolled through the necropolis alone. It was just me and the towering mausolea. Magical. But then some guy started following me and I took that as my cue to leave. I got a late bus back to Damascus and prepared for the next day’s departure for Israel via Jordan. 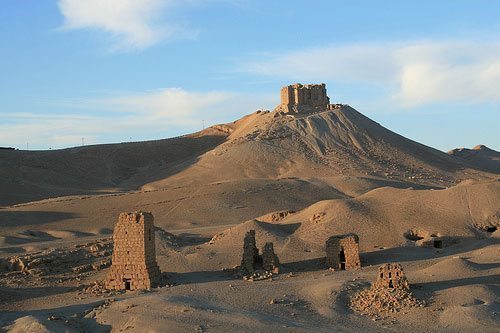