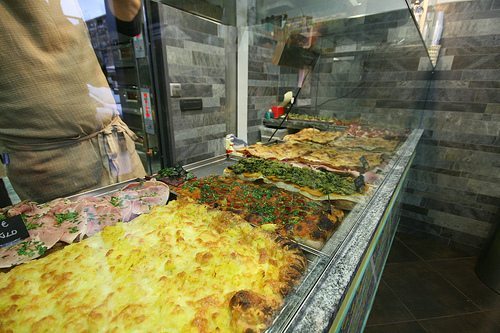 Gabriele Bonci’s Pizzarium was featured in The Layover.

Anthony Bourdain’s new show “The Layover”, in which the host spends just over 30 hours eating his way through a city, visited Rome last week. I’ve already gotten a dozen emails inquiring about the venues he visited and asking for my judgement. I’m not one to mince words so I’ll just come out and say it. The show’s location manager needs her head examined. If the gastronomic visitor has 30 hours in Rome, he or she should be directed to places that are actually worthy of being inserted into a brief, food-driven stop-over.

Instead, the show visited some rather random and some not very good spots. Among the places covered in The Layover, one is an absolute must (Pizzarium), another is a personal favorite for good, cheap food (I Porchettoni), but the rest are far from being the best in their category (sorry but Gelateria dei Gracchi, Il Ristoro degli Angeli, Cacio e Pepe and Sora Lella just don’t cut it–the latter most of all–and certainly not on this tight schedule).

I thought it would be fun to do my own written version of The Layover and make suggestions of where to eat if you only have a day and a half in Rome.

Day 1: Coffee and a pastry at Sciascia, lunch at Pizzarium (at least one of the venues from The Layover actually deserves a short term visitor’s time!), gelato at Fatamorgana in Prati, Il Gelato di Claudio Torce near the Spanish Steps, or Neve di Latte in the Flaminio neighborhood. Before dinner head to Il Goccetto for some wine, then Roscioli for burrata and carbonara. Round out the evening with artisanal Italian beers at Open Baladin or Ma Che Siete Venuti a Fa.

Day 2: Make breakfast a savory one and pick up a slice of pizza bianca at Forno Roscioli. For lunch visit Armando al Pantheon for exceptional gricia and coda alla vaccinara or L’Arcangelo for suppli’ and gnocchi. Grab a late afternoon pastry at Regoli near Stazione Termini and hop the train back to the airport.

What places do you recommend in Rome for the gastronomic traveler on a tight schedule?