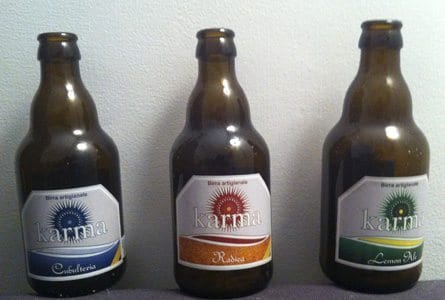 A quick spin through any Italian beer shop will reveal that the vast majority of this ancient beverage is produced in Northern Italy, mainly Piedmont, Lombardy, and Emilia Romagna. But the south, too, puts out some fine brews. In Campania, Birrificio Karma produces a number of very decent beers in their brewery near Caserta.

I have to admit I was first attracted to Karma when I visited my local beer shop and noticed they make .33L bottles. In Italy, most craft breweries put out .75L (wine bottle volume). Now I haven’t bought myself an item of clothing in a good six months, but I can’t walk past a liquor store without buying something, and these enormous bottles of beer aren’t cheap. I was routinely spending a silly amount of money on large bottles, which was bankrupting me while simultaneously limiting the possibility of tasting different types. So Karma provided the volume and price alternative I was looking for when in the mood for a casual beer. I was encouraged when the first few bottles I tasted were quite good and even more so when I researched the brand. They may cost a bit less than some northern competitors, but Karma beers are no slouches. They are unfiltered, unpasteurized, undergo secondary fermentation in the bottle (Champagne style) and are made from quality ingredients.

I drink .33L Marilyn, Radica, and Amber Doll quite a lot and they are food friendly and easy to drink. Far more precious is the Centesimale, Karma’s 100th batch anniversary beer, a limited edition brew that is made with the cooked must of the local Pallagrello grape and Annurca apple jam. The bouquet resembles more a sparkling rose than it does a beer, with prune and berry aromas.

Try them for yourself. You can buy bottles directly from Birrificio Karma’s website or track them down at your local pub or beer shop.