A Tale of Three Carbonaras 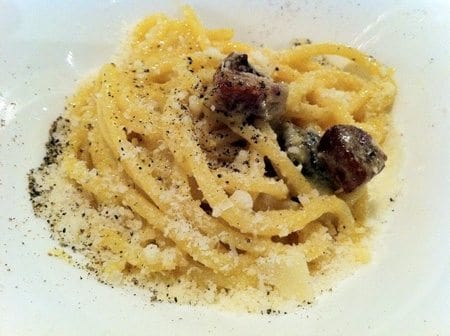 I’ve been talking about carbonara a lot lately. It has come up in conversation no fewer than six times today with friends, family and clients. I’ve always been a fan of this dish in which pasta is tossed with egg yolk (and sometimes albumen), pecorino cheese, guanciale and black pepper, but 2010 was a record-setting year for my carbonara consumption–and I’m not doing to shabby in 2011, either. After a serious

amount of research, I’ve found the three carbonara dishes every visitor to Rome should try. If the average visit lasts three nights, that’s more than enough time to taste them and leaves time for other must-eats like pizza by the slice at Pizzarium, gelato at Claudio Torce’, and fried starters at Nonna Betta. Here are the results of my great carbonara quest, in no particular order:

Da Danilo (Via Petrarca 13, Esquilino): a very dry version of carbonara made with spaghetti, pancetta*, egg yolk, and black pepper. The pasta is served in a compact tangle of spaghetti strands and garnished with a crisp piece of pancetta (not guanciale). In the summer, a variation with zucchini and saffron is also served.

Roscioli (Via dei Giubbonari, Campo): This “branded” gourmet version of the Roman classic is made with Verrigni‘s thick spaghetti, guanciale* from Monte Conero, Paolo Parisi eggs, Rimbas malesiano black pepper (recognized by Slow Food), pecorino romano, and pecorino from Moliterno. The guanciale is crispy and cubed, the cheese is pungent, pepper aromatic, and pasta fragrant. The Parisi eggs are the least noticeable (and therefore least necessary) luxury item in this carbonara and could easily be substituted with something less absurd, though they are an essential part of the name-dropping penchant of this heart stopping dish.

L’Arcangelo (Via GG Belli, Prati): Verrigni’s rigatoni are tossed with egg yolk, mature guanciale, and toasted ground black pepper (sometimes this is omitted). The eggs aren’t designer, just those supplied by Fortunato Longino in the Prati Market (box 67) You can find the recipe (in Italian) here. Simple, saucy and silky, the short pasta adds a new dimension to the must eat Roman dish.

*mistranslated as bacon on the menu–this is unsmoked cured pork belly; I don’t think Da Danilo doesn’t has an English menu!