What Became of Your Lamb, Clarice? 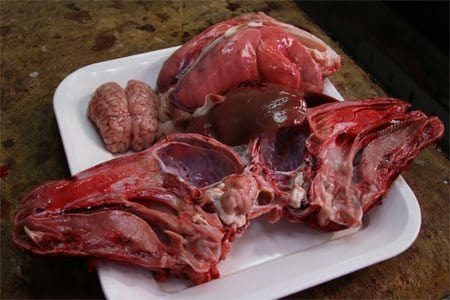 My love of Rome’s quinto quarto (offal) is no secret. I often joke that it was archaeology that brought me to Rome, but the organ meats that kept me here. Hilarious, right? Well, it is kind of true. I am especially fond of lamb innards and coratella (lungs, heart, and liver) is a favorite dish. I asked my butcher Daniele if I could film a segment at his shop in the Testaccio Market while he butchered a lamb and removed the coratella. He was gracious enough to oblige and I attended the big event this morning.

He began by hanging a 12 pound lamb on hooks by it’s Achilles tendons. He then decapitated the animal, splitting its skull to remove the brain, a rather violent series of events that took nearly 45 seconds and 2 different knives to complete. Nevertheless, the brain escaped perfectly intact, and practically begged to be deep fried. I mentioned to him that I adore animelle (sweet breads) and he sliced out these glands from the throat and beside the heart with surgeon-like precision. Next came the coratella harvest. He split open the lamb’s chest, pulled apart the ribcage, and sliced out the lungs, heart, and liver. These organs are connected to one another by tissue and he pulled out the whole mass and laid it beside the skull and brains.

Still reading? This is the best part: Coratella is a classic Roman dish historically cooked at Easter when the spring lambs would be slaughtered. The meat would be grilled (think abbacchio scottadito) and the organs would be sauteed with artichokes. These days, the once seasonal offal and produce are available year-round. Lambs are raised 12 months a year and artichokes are imported to Rome from Sicily, Sardegna, and France. For the real deal, you are going to need to wait until spring for the true carciofi romaneschi (Roman globe artichokes) and spring lambs to be in season. Then and only then does coratella reach its full potential.

To make coratella, or any of the other traditions of Rome’s quinto quarto, just drop by Sartor and order the goods from Daniele. Sartor is open Monday to Saturday from 8am-1pm.