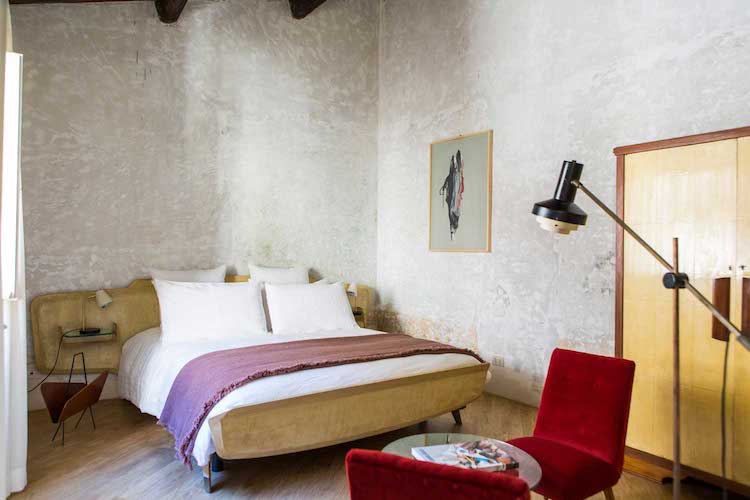 Updated January 2023: The dollar to euro rate is enjoying near-parity these days so if you’re travelling from the States, why not book a trip to Rome? If you’re not, then I wish favorable currency exchanges for you, too! There are thousands of accommodations to choose from, ranging from dingy hostels near the train station to overblown 5-star luxury hotels with a Spanish Steps view. Narrowing down the options can seem daunting, so here are some recommendations, from self catering apartments to five-star digs. And if you’re looking for an Airbnb, I suggest staying around Largo Argentina, around Campo dei Fiori (read reviews about noise carefully!), and Trastevere. Those neighborhoods will all put you deep in the mix!

Il Boom B&B: Il Boom’s three spacious, light-filled rooms are each named for an Italian actress—Sofia Loren, Monica Vitti, Anna Magnani—and have artwork to match. Loren has a view of the surrounding gardens, Magnani has a view of Rome, and Vitti has a private balcony. The common areas include two panoramic terraces outfitted with umbrellas, deck chairs, and tables. There are three cats and five turtles that hang out in the communal garden.

Buonanotte Garibaldi: Three rooms crafted out of the owner’s textile studio in a very quite part of Trastevere (except at noon when the canon on the Gianicolo uphill goes off).

Nicholas Inn: An amazing location near the Forum, comfortable and elegant rooms and a super nice and accommodating staff make the Nicholas Inn Rome’s leading B&B.

The Beehive: Americans Steve and Linda offer friendly, eco-conscious accommodations of varying types in the Esquilino neighborhood. Private rooms (from €70), dorm beds (from €20), and self-catering apartments (from €180 per apartment).

Hotel Santa Maria in Trastevere: Nineteen rooms set around a 16th century cloister in the heart of Trastevere.

Hotel Fortyseven: This stylish contemporary hotel in the former cattle market is has a fabulous roof terrace and well appointed rooms.

Babuino 181: Situated between Piazza del Popolo and the Spanish Steps, this relative newcomer consists exclusively of luxury suites. More in the NYT here.

Albergo Santa Chiara: A labyrinthine three-star just one block from the Pantheon. If you want to be in the heart of the historic center with restaurants, wine bars, and shops at your fingertips, this is the place.

Hotel Ponte Sisto: A four-star hotel near the pedestrian bridge leading to Trastevere with quiet rooms, and a lovely internal courtyard.

Villa Spalletti Trivelli: Elegantly decorated rooms and suites, a spa and a private garden make this luxurious villa on the slopes of the Quirinal Hill a unique destination. Proximity to the Forum is a bonus.

G-Rough: This boutique luxury accommodation opened in central Rome in March 2015 on a square just off the exuberantly Baroque Piazza Navona. The suites-only hotel is the work of hoteliers Emanuele Garosci and Gabriele Salini, who blend mirrored and distressed surfaces with modern design elements and Venetian artwork. The only things remotely “rough” about the place are the walls, which have been artfully stripped down to reveal textured strata of centuries-old paper and paint. Read more on Afar…

D.O.M.: The D.O.M. is a five-star boutique hotel in the heart of Rome’s historic center. Originally built as a 17th-century noble palace, the property was subsequently converted into a monastery, then Ministry of Justice offices. Its current design, which blends architectural elements from its previous uses, was entrusted to architect Antonio Girardi, who has seamlessly married Renaissance reverence and modern design. More in the NYT…

JK Place: Opened in a building that previously housed the University of Rome’s architecture department, JK Place is one of the additions that paved the way to Rome’s growing number of high-end luxury boutique hotels. It is located near the intersection of Via Del Corso and Via dei Condotti, Rome’s most chaotic shopping nexus, but it is just far enough away from the action to maintain an air of seclusion, a rarity for the zone. More on Afar…

Hotel de Russie: One of Rome’s poshest address offers comfort, luxury and service. There’s a spa, garden and a perfect balance between classicism and modernity. If you want something even more up-to-date and over-the-top, plus views, try the Hotel De La Ville, operated by the same restaurant group.

Hotel Raphael: A five-star hotel and veritable art museum located just steps from Piazza Navona. The roof-top bar and restaurant has amazing views and is a lovely place to grab a drink whether you are a guest or not.

Casa Aventina: My lovely friend Daniela of Daniela’s Cooking School rents her apartment in the Aventine, a quiet residential district very close to the Circus Maximus. Guests get a 10% discount on Daniela’s classes.

Spanish Steps Apartment: This gorgeous apartment rental on Via della Mercede near the Spanish Steps is available for five day minimum stays.

A Villa Outside Rome

Casale Sonnino is a fabulous family-owned villa in the Roman countryside. The property is immersed in a historic wine producing region and is home to wonderful nature and biodiversity–not to mention a few ruins!