A Vegetable Garden on Via dei Fori Imperiali? 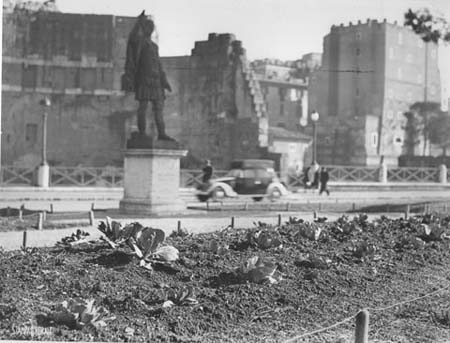 Today French farmers transformed Paris’ Champs-Elysees into huge farm, covering the road with soil and bringing in 150,000 plants. The event was organized by Jeunes Agriculteurs, an association of young farmers, to raise awareness for the agriculture crisis in France. Could Rome’s triumphal way, Via dei Fori Imperiali, follow?

It wasn’t so long ago that the stretch of road between the Colosseum and Piazza Venezia (above), the parade route built by Mussolini, was once trimmed by a vegetable gardens and grain fields planted during WWII. Called Via dell’Impero by Il Duce, it was renamed Via dei Fori Imperiali after his regime collapsed.

Long before the war gardens were built, or the parade route itself for that matter, the area was partially dedicated to agriculture. Goats, sheep, and cows grazed among the area’s houses, churches and ruins. Open squares were the site of vineyards and produce gardens. We may be able to do without the livestock today, but perhaps a city garden would fare well along the Via dei Fori Imperiali…Thoughts?

This video shows the war gardens being worked and harvested and the end bit shows Marcus Aurelius and his horse being removed from the Campidoglio, another destination for a city garden, perhaps?