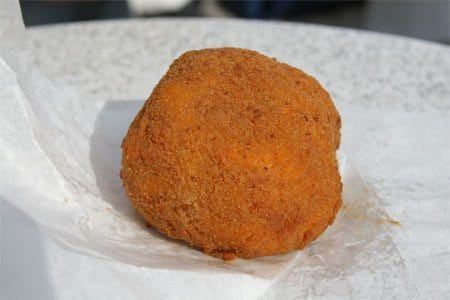 The Arancina Bomba is a fried rice ball bomb. Imagine a softball-sized wad of rice packed with meat and peas, rolled in bread crumbs and deep fried to a golden hue. The name could not be more appropriate, as in Italian bomba is a word used to describe something heavy and fattening. For example, “that sack of mozzarella filled with cream was a bomba. Last week I indulged in the Arancina Bomba at Bar Touring in Palermo. I had big plans of having my rice ball bomb as a snack followed by a panino con panelle in Ballaro’ for lunch. After devouring half of the Arancina Bomba, I realized that this would be a physically impossible task. Even I, who has diligently trained herself to overeat when in Palermo, could not imagine eating anything for hours after my stop at Touring. I consoled myself with the second half of this deep fried rice treat.