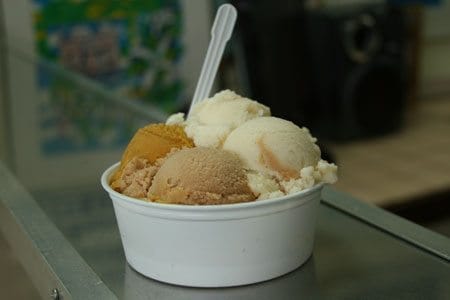 Today, my dad, stepmom and I drove an hour and a half from our place in Rincon to visit Heladería de Lares, Puerto Rico’s most famous ice cream shop. This photo doesn’t do the size of this bucket justice. The cup was six inches in diameter and was crammed to the hilt with cod, tamarind, garlic, and pumpkin soup ice cream (listed in order of ascending palatability). Now, I wouldn’t recommend putting all four of these flavors together, and I would strongly discourage anyone from eating cod ice cream ever, but we had made the trek, so I thought I’d take advantage of the opportunity to taste these four weird selections.

While the texture of the ice cream wasn’t amazing-it was quite grainy and the cod was freezer burned-each managed to capture the essence of its flavor extremely well. To a large extent, the unique array of flavors at Heladería de Lares more alluring than the ice cream’s quality itself. That said, the garlic was surprisingly refreshing (though I am still tasting it five hours later) and the cazuela (pumpkin soup) was downright delicious, tasting a lot like raw pumpkin pie filling. My stepmom’s maize was pretty good too. Good enough that I will definitely come back on our next trip to western Puerto Rico. And I just might go for the rice and bean flavor while I’m at it.

Gabriele Bonci To Open a Pizzeria In Chicago