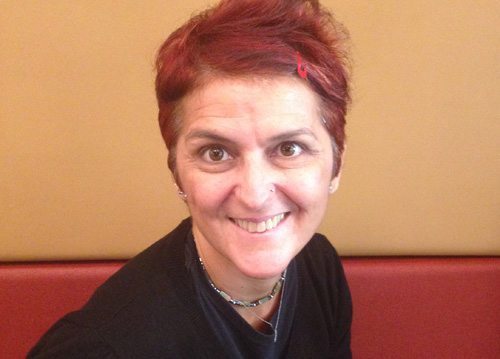 This week we hear from Cristina Bowerman, chef and owner of Glass, a one Michelin star restaurant in Trastevere. Bowerman is also the chef and owner at Romeo, which opened in Prati in November 2012.

Parla Food: Describe your work and how it came about
Chef Cristina Bowerman: My work right now has become slightly complicated because I’m the co-owner and chef of two restaurants. So I am the head of two staff, of two brigades, one at Romeo and another at Glass. Glass is obviously the most important restaurant between the two of them because it was the first one, it has been around for 10 years, and it has a higher reputation to defend. It kind of gives pulse and life, which is more difficult than Romeo, which is young. So keeping up with new techniques and all the stuff that changes, obviously, even if I have a very low turnover, there’s still a turnover, because otherwise it would be static. And then all the mess about vendors and deliveries, and food calls, and clients who are crazy sometimes and clients who are awesome sometimes, and your staff’s mood, the breakup of girlfriends, of boyfriends, so it is slightly complicated. How it came about? I always loved cooking, but there’s a huge difference between cooking and being the head of a restaurant, because you can be both, but one can exclude the other. You can be a cook and not be the head of the restaurant, whereas if you’re the head of the restaurant, you’re not necessarily going to be cooking at the same rate or as consistently as you did, maybe years earlier.

PF: What inspires you?
CB: Anything! But travel probably more than anything else. Books number two. And three, anything that comes around. It could be yesterday’s trip to the yard to see what kind of vegetables are around, like cardoons. I saw cardoons and thought, “What can I do with cardoons,” and so on. I would say that travel is probably the thing that inspires me the most. I force myself to get inspiration from anybody and anything that revolves around me, or vice versa, or I go somewhere to be inspired. I think that inspiration comes from things we don’t know. Like if you know everything, which is impossible, or if you stop learning, you will eventually stop being inspired. I am aware and I am unaware, and I am perfectly aware that there are a million things I don’t know. I try to learn something new every day, which was one of the promises I made to myself since I was a kid. I don’t want to go to bed any night without having at least learned one thing. It could be a stupid thing, it could be a word in a different language, like when I started to learn English, and I used to go to bed having learned at least 10 words in English. I say “I need to learn one new thing,” and I read, and I go to a couple of conventions a year to get inspired.

PF: What profession would you most like to try?
CB: Photography. I like faces especially, but I can’t shoot anything. Whenever one picture comes around that’s good, I’m so happy, but I’m terrible. Like when people say, “What would you like to do in your next life,” I would like to be a photographer.

PF: What profession would you not like to try?
CB: I have never thought about that. One thing that I could not handle, and I gave up on it once: I worked for a year in a juvenile prison. I couldn’t take it; it was too much for me to see these kids that were abandoned by their parents. I ask myself, “How did you do that?” I know that it’s cowardly behavior, but personally, I wouldn’t be able to handle a job that deals with violence on kids.

PF: Who do you respect most?
CB: In the abstract, I respect people that are true to themselves. You don’t deviate because it’s more convenient. Coherence is more the virtue that I value the most in a person. I could mention twenty people, starting from my partner [fusion_builder_container hundred_percent=”yes” overflow=”visible”][fusion_builder_row][fusion_builder_column type=”1_1″ background_position=”left top” background_color=”” border_size=”” border_color=”” border_style=”solid” spacing=”yes” background_image=”” background_repeat=”no-repeat” padding=”” margin_top=”0px” margin_bottom=”0px” class=”” id=”” animation_type=”” animation_speed=”0.3″ animation_direction=”left” hide_on_mobile=”no” center_content=”no” min_height=”none”][Fabio Spada]; he’s one of the people I admire most because he’s very coherent. If I had to mention some people, I could start from Obama: he’s a person that has fought more than we could imagine to become who he is, being the first African-American president. But then, I could go back to the little ones, like the director’s of my son’s preschool. Two families who had a plan, which was like a Casa Famiglia, where poor people bring there kids to be babysat while they went to work. They probably struggled a lot, and gave up their personal life. Neither of them is married, and they ended up adopting one of the kids. You could move to big personalities, like the Nobel Prize winners, but I prefer to stay with my feet on the ground and talk about people around me.

PF: What is your favorite food?
CB: Certainly anything that has to do with Asia. I love Vietnamese food, Japanese food, so there’s not one particular thing that I like. If I had to choose between foie gras, tortellini with cream, grilled steak, or pho, I would go for the pho, no doubt.

PF: What’s your favorite drink?
CB: I like anything that ends up as a martini, like dirty martini, Mexican martini, etc. I love beer, I love artisanal beers. I remember my first beer tasting: it was Lindeman’s. It was a fresh, fermented strawberry beer.