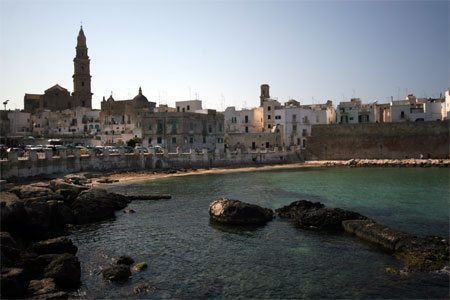 Monopoli makes a fine base for exploring the sites in the Terre di Bari and one could easily spend an entire day there eating from one side of the town to the other. I suggest beginning with a cappuccino and a mezzatonda at Bar La Nave at the end of Via Cappuccini. If you prefer a savory breakfast, simply cross the street to Panificio Fortunato for a slice of focaccia. From here, burn off a few calories walking to Piazza XX Settembre on the outskirts of the centro storico. There, a daily market showcases the region’s best produce and freshest fish including live squid, wriggling fish, and fresh mussels. 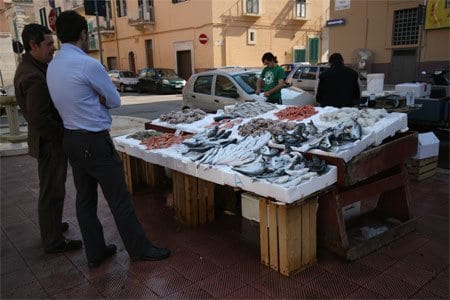 Spend the morning wandering the through the medieval center of town, fortified over the centuries against invasions. The the bastion walls that encircle the city medieval streets are punctuated with towers built by the Spanish, the occupying force that was also responsible for many of the religious and civic buildings scattered throughout the town. Stop for a coffee or a drink at Caffe’ Venezia in the eponymous square where tables fill the piazza when the sun is shining. 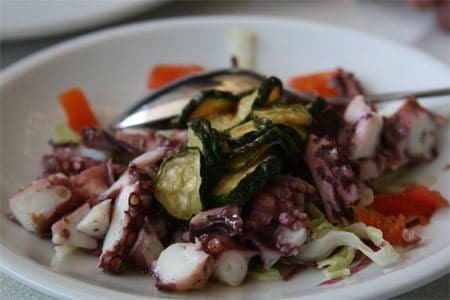 Walking away from the centro storico on Via Procaccia, you will find Lido Bianco, a beautifully sited restaurant perched on a rocky out cropping above a cove bathed in turquoise waters. At the entrance, a large display of fresh fish serves as the restaurant’s menu. Lido Bianco’s crudi (raw shellfish) are delectable but the antipasto misto di mare is on another level: insalata di mare with zucchini, smoked salmon with orange zest and pink peppercorns, mushroom and shrimp crepes…It could be a meal on its own, though try, if you can, to leave room for primo and secondo. Fish this fresh is worth the effort.