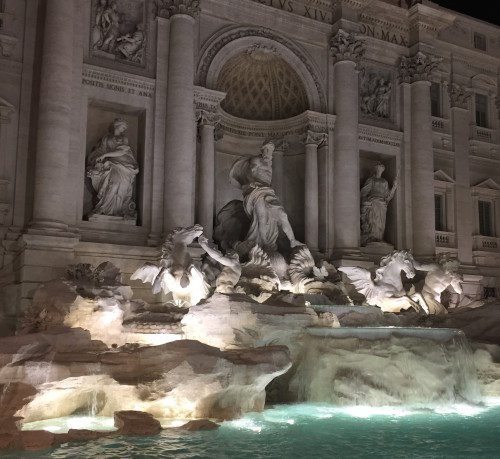 If you have every strolled through Rome, you may have noticed that the city’s fountains, church pediments, and palace facades are branded. The Pamphilj family’s dove with three fleurs-de-lis are splashed all over Piazza Navona, while the Della Rovere oak tree emblazons countless public works. Meanwhile, Barberini bees compete with the Borghese family’s dragon and eagle for the historic center’s prime real estate.

For centuries, Roman nobility funded public art and architecture and advertised their generosity with inscriptions featuring their names or family symbols. But after Italian unification, this part-philanthropy-part-public-relations tradition withered. Only recently have families begun to contribute conspicuously to public culture again, albeit through their companies. Diego Della Valle of Tod’s pledged €25 million euros to restore the Colosseum. In an interview with Forbes he says,

In our country we are not accustomed to this kind of initiatives, especially because people always think of an economical return. Maybe after the restoration of the Colosseum something will change, since there is also a legal emptiness that must be filled. Many businessmen want to give, in addition to money, also their energy and their international experience to improve situations where the state doesn’t intervene. The intervention of private citizens in cultural initiatives must be supported by the government and not obstructed, ensuring the creation of new jobs and a real economic recovery.

Della Valle’s efforts are encouraging and his reasoning is sound. To sweeten the deal, the Colosseum restoration-in-progress looks amazing. And it’s moving quickly–funny how that happens when private donors insist on transparency and enforce budgets and deadlines! The State could learn something. But it won’t. Instead, it will remain bloated and useless and shockingly incompetent. Thankfully, Della Valle’s efforts have not fallen on deaf ears and other fashion houses are following suit.

The Bulgari jewelry brand is restoring the Spanish Steps, while Fendi For Fountains was founded to restore the Italian capital’s famous water features. In March, FFF’s first project–a restoration of the smog-stained Quattro Fontane–was completed at a cost of €320,000. On Tuesday, the more ambitious Trevi Fountain renovation was completed; the cost of the 17-month-long project was more than €2 million. I can think of a thousand other Roman places that needed TLC more than the Fontana di Trevi, but the Baroque fountain certainly fits with the Fendi’s self image as the embodiment of creativity:

The long-lasting love story between Fendi and Rome, its hometown, is an overwhelming and inspiring force that transcends time. A solid bond that has forged the house’s soul while sparking the creativity and craftsmanship behind its successful iconic products. Fendi pays tribute to the Eternal City…where water and creativity flow liberally and relentlessly.

The Fendi PR department could take it down a notch and make it less about them and more about culture, but instead they invited the reanimated corpse of Karl Lagerfeld to star in a promotional video for FFF.

The video really embraces the ridiculous frivolity of the Fendi brand which seems pretty out of touch with what Rome’s culture scene really needs: less shameless self-promotion and more selfless philanthropy. The restored fountain looks amazing and all, but it’s a drop in the bucket.