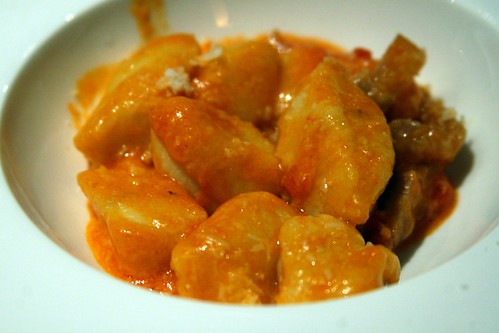 Today, March 10, 2011, is a historic day. It marks the five-month anniversary of Armageddon. You can read all the gory details here, but in a nutshell, Armageddon was a conciliation dinner held in my honor (?) at L’Arcangelo following a scathing post I wrote about lunch at this famous restaurant in Rome’s Prati district. For the meal held on 10/10/10, chef Arcangelo Dandini pulled out the big guns and made a dish that never had appeared on his menu. It was called Gnocchi di patate e l’evoluzione del cacio e unto, con dedica alla Sora Lella, in other words gnocchi alla matriciana.

Over these past five months, the gnocchi have become somewhat of an obsession for me and the others who were present at Armageddon. They weren’t on the regular menu, but you could call and order them in advance. Tomorrow, however, they will become a permanent fixture on the menu (Thursdays only!) and they will shake that first wordy monkier and adopt and new one: Il club degli gnocchi alla matriciana della Sora Lella. That is Roman dialect for deliciousness.

If you like gnocchi (and especially if you don’t) I highly recommend a visit to L’Arcangelo any given Thursday. Though gnocchi are served all over the city on this designate day (the origins of this tradition are obscure) very few are any good these days. When I first moved to Rome I just assumed the gnocchi I was eating were always made from scratch from fresh ingredients. But the more I ate, the more their gluey consistency and sheer density made me doubt that what I was eating was, indeed, potatoes, flour, salt and egg. My suspicious were confirmed a couple of years ago when I went to Pasta Fresca Mea to film a segment on the Thursday tradition and was horrified when the main ingredient was dehydrated potato flakes poured from a massive sack. I swear I dry heaved when I saw the “pastaio” pouring them into the mixer. The footage, naturally, was unusable, but worse, these faux-cchi were being made to supply Testaccio’s trattorias. My relationship with gnocchi has been uneasy ever since.

Now back to the matter at hand. The gnocchi at L’Arcangelo are ridiculous. They are silky potato pillows to which a pecorino-rich tomato sauce and its bits of guanciale cling to in a perfect union. They cost €15 a portion (certainly not cheap but when you consider the potato flake shit is priced at €10-12…). I suspect that from tomorrow onwards, a table at lunch and dinner will be quite hard to snag on giovedi’.