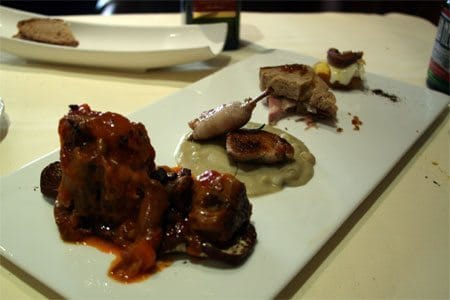 I got caught in the rain near Castel Sant’Angelo at lunchtime on Monday and I took that as a sign to try the nearby L’Arcangelo, a super famous, well loved place run by Arcangelo and Stefania Dadini. Unfortunately, I had misinterpreted the sign. It was an omen to hop on the 40 bus and high tail it home. Lunch at L’Arcangelo was a disaster. To call it amateurish would be kind. The phrase apocalyptically awful comes to mind.

The degree to which every dish–7 in total–was flawed was stunning. I had read many rave reviews of the place and, while I generally take strangers’ restaurant reviews with a grain of salt, I was not expecting food that was so carelessly prepared or so poorly conceived. This is how L’Arcangelo’s gastronomic Armageddon unfolded… 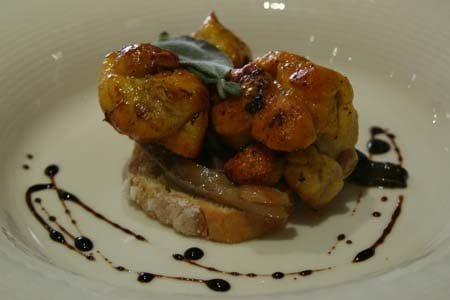 The Lamentation of the Martyrs: It began with a starter Arcangelo calls “Fiumè”, sweetbreads, herring, and buondì Motta. That last item is a sort of breakfast bread that was as obnoxious in the dish as the website that promotes it (visit here at your own risk). The steaming sweetbreads had rendered the buondì flaccid and inert. I couldn’t figure out in which alternate dimension adding bread to this dish was a good idea. The sweetbread-herring combo was a flop, too. The fish was too salty and annihilated the subtle sweetness of the sweetbreads. When eaten on their own, or with a bit of the balsamic reduction on the plate, the sweetbreads were delicious. 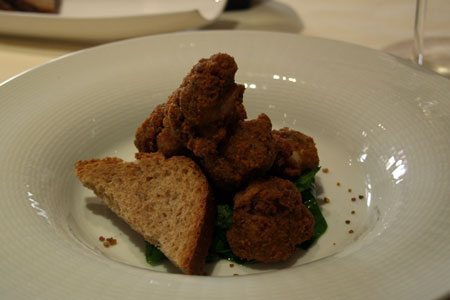 The Earthquake, Blood-Red Moon, and Falling Stars. The whimsically dubbed “Ritorno al lago Regillo”: deep-fried rabbit nuggets on wild greens with a side of toast. (Well, actually fette biscottate, gross Italian pre-toasted packaged breakfast things. The attempt here, I think, was to weave in 1960s mass production themes. That is the only logical way to make sense of buondì Motta and fette biscottate on a restaurant menu.)

As anyone could have predicted, the boiling hot fried rabbit made the leafy greens beneath them turn into unpleasant mush. But even worse, the rabbit was raw. At first I figured I wasn’t “getting it” and continued eating. Several of the raw rabbit nuggets were soft enough to chew through. The rest were so riddled with rubbery tendons, I just gave up, leaving half the starter on the plate. When Ms. Dandini took my plate back into the kitchen (without me having said a word) she shouted, “Aho! Ma ha lasciato tutto. E’ crudo!” In other words, “Listen up! This is raw so she didn’t finish it.” Ah, I love when kitchen chit chat validates my suspicions.

The Four Horsemen: In keeping with the theme of cutesy names, this second course was called…I don’t remember. It was some pointless trying-to-hard kinda name. Basically, there were four dishes rooted in the cucina romana/laziale on one long plate. 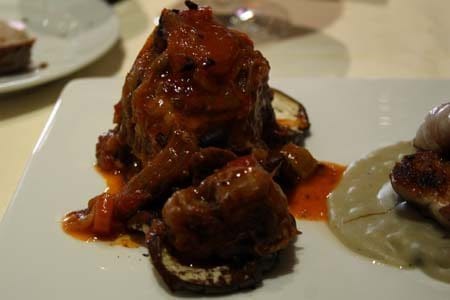 Oxtail on cocoa-dusted eggplant. This dish would have been amazing if it had been reheated all the way through. The sauce and exterior meat was great but all of the meat close to the bone was cold. Unlike the place in hell reserved for the person who botched such a well seasoned dish. 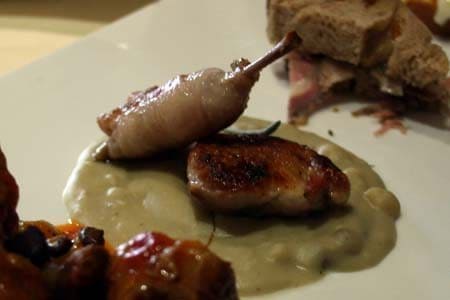 Guanciale-wrapped quail on a bed of pureed cicerchie (a local chickpea-like legume) would have been a winner if there had been enough salt in the dish. Of course, restaurants in Rome do not provide salt shakers on the table because chefs and cooks believe they season everything perfectly. They are not always right. 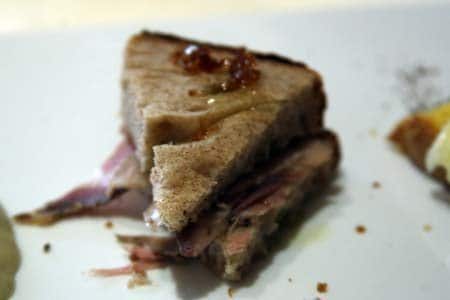 The porchetta sandwich was prepared sloppily and was a totally weird item for a second course. Is this a restaurant or an alimentari? I’m pretty sure I was charged restaurant prices. 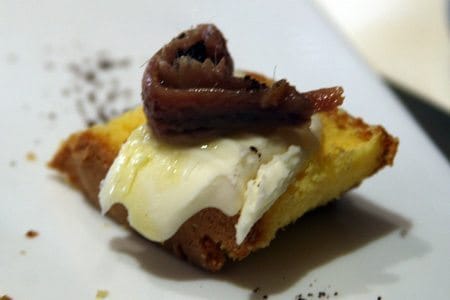 The anchovy and butter on pan di spagna was terrific. The combination of flavors and textures was great–the sweetness of the butter and pan di spagna worked with the saltiness of the anchovy as though they were all born to go together. There was nothing wrong with this one at all. It’s here because six signs of the Apocalypse would have made this bad review a bit anticlimactic, no? 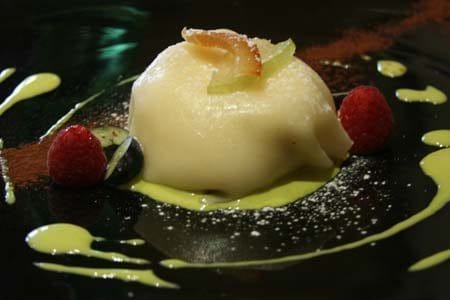 Cue the seven trumpets: The dessert dubbed cassatina invisibile was neither like a small cassata nor was it invisible. The typical Sicilian cassata is a cloying dessert made with sweetened ricotta on a layer of pan di spagna, all covered with a sheet of super sweet almond paste (aka pasta di mandorla, pasta reale, or marzipan). L’Arcangelo’s failed interpretation was an almond paste purse filled with local ricotta. There was no pan di spagna which, in the chef’s words, made his invention “invisible”. I found that explanation odd, but what perplexed me more was the near or total absence of sugar in the aggressively pungent ricotta. When paired with the seemingly sugar free almond paste, the result was and acidic and bitter.

The Last Judgement: Owners Arcangelo and Stefania are very nice people, perfectly polite and accommodating. When I pointed out the rabbit was raw (after overhearing the proprietress berating the kitchen), they apologized profusely, offered to remake it (I declined), then offered to take the €15 starter off the bill. Still, Monday’s lunch was one of the worst meals I have ever had in Italy. The bill came to €79 with a bottle of water and two glasses of wine. Money not well spent.

This is the address so you, too, can avoid it:

UPDATE I will returned to L’Arcangelo in October for a sort of conciliation dinner. You can read about it in English here and Italian here.