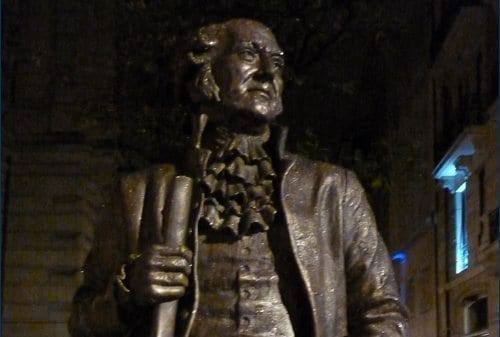 A statue of John Adams in downtown Bilbao.

The journey through Basque Country continues and on this fair July 4, 2011, I would like to send out a brief salute, evoking the words of John Adams, second president of the United States, and admirer of the Basques. In his 1786 “A Defense of the Constitutions of Government of the United States of America, Vol, 1, Letter VI” Adams reflects on his visit to Basque Country,

In a research like this, after those people in Europe who have had the skill, courage, and fortune, to preserve a voice in the government, Biscay, in Spain, ought by no means to be omitted. While their neighbours have long since resigned all their pretensions into the hands of kings and priests, this extraordinary people have preserved their ancient language, genius, laws, government, and manners, without innovation, longer than any other nation of Europe. Of Celtic extraction, they once inhabited some of the finest parts of the ancient Boetica; but their love of liberty, and unconquerable aversion to a foreign servitude, made them retire, when invaded and overpowered in their ancient feats, into these mountainous countries, called by the ancients Cantabria. Read full letter here.

Happy July 4th, people! Mamma Parla and I are visiting Gernika and have lots to report from the past few days. More posts on eating and traveling in Basque Country.