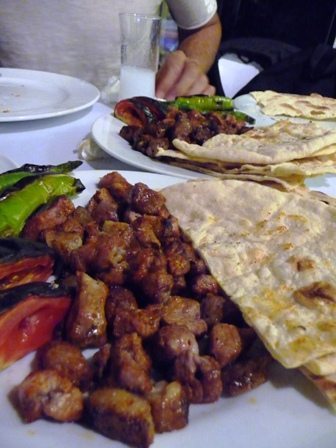 Best. Adana. Kebab. Ever. And I didn’t even eat it in Adana. I found this spicy charcoal grilled goodness at Kebabçı Yusuf Usta’nın Yeri in Erenköy (on Istanbul’s Anatolian side). The word kebab is a pretty loose term that I guess can be roughly translated as “grilled things”. Meat is usually involved, though eggplant can be thrown into the mix. There are different styles originating in various regions throughout Turkey, but the Adana incarnation is a spicy blend of ground lamb, tail fat, parsley, and red pepper flakes. The meat and other ingredients are kneaded together, formed around a wide skewer, grilled, and served with lavaş, onions, parsley, and grilled peppers.

But that was not how the meal at Yusuf Usta began. As all kebab meals should, we started with mezes and rakı. Standouts included the çiğköfte (raw ground beef and bulgur eaten with lettuce) and tahini with grated radish and parsley. These were followed by bits of grilled liver and meat, also served with lavaş.

Once again, I cannot take credit for discovering this place. It was recommended by 2 twitter friends/followers, like minded carnivores who know where some of Istanbul’s best kebabs are to be had.