Skip to content
Home/Lardo in Hackney, London
Previous Next 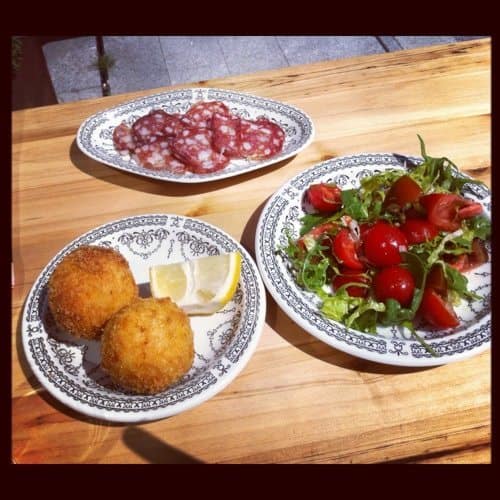 A few weeks back while cycling around Hackney, I came across the recently opened Lardo. It was a sweltering day and nearby London Fields was teeming with scantily clad Instagraming hipsters, while Lardo on Richmond Road was quiet and inviting. I grabbed a spot outside, ordered some rosé and selected a few snacks. The place immediately won me over with its name, the Italian word for lard, which refers specifically to a cured slab of unrendered pork fat. Said delicacy may be my favorite food, after butter and chicken skin, of course.

I asked the server for recommendations and settled on the heirloom tomato salad, which was intense. Its spectrum of flavors and textures were befitting of such a summer dish. Perhaps less adapted to the heat (yeah I just blew your mind! great tomatoes in London AND infernal temperatures!) were the arancini, which were oddly served with a wedge of lemon. Their crusty exterior gave way to an insipid rice interior with a spicy nduja and melty cheese heart. The rice to filling ratio left me yearning for more spice or salt, but definitely not a splash of citrus juice. The house cured fennel pollen salumi was…let’s say subtle? Fennel pollen nuances were conspicuously absent, but the fat chunks were a delight. They melted on the palate, which called for a fresh rosé.