Skip to content
Home/L'Asino d'Oro Reopens in Monti
Previous Next 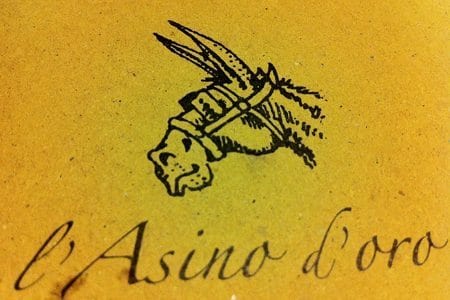 Lucio Sforza keeps moving south. First, he closed his famous L’Asino d’Oro in Orvieto, reopening it in Rome’s Montesacro district in November 2009. Then, he closed that location and opened on Via del Boschetto in Monti on Monday. I’m a big fan of L’Asino, wherever it may be, so it was my first stop for food after arriving back in Rome last night after 3 weeks in London. 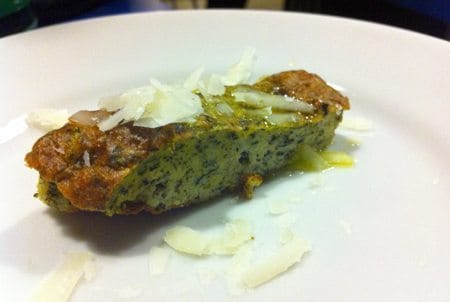 The menu is very similar to that at L’Asino’s previous incarnations, drawing heavily on Sforza’s Umbrian roots, with some personal flare thrown in. Pork, offal, and sweet and sour contrasts abound and there is even some northern Lazio thrown in, like a contorno of the Slow Food recognized lenticchie di Onano (lentils) from the Province of Viterbo and coniglio a buione (rabbit cooked with vinegar and tomatoes). 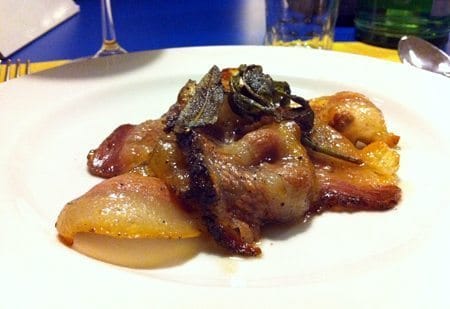 Baffo with sage and vinegar.

The antipasti (called fuoripasti) include a chestnut frittata (€7), tripe with anchovies (€9), sweetbreads with vin santo (€10) and “baffo” with sage and vinegar (€7). In my bizarre attempt at detox after really overdoing it in London, I opted for this last one, ribbons of guanciale, which, were recommended by the server. The vinegar added a nice acidity to cut the fat and the delicious dish almost seemed light. 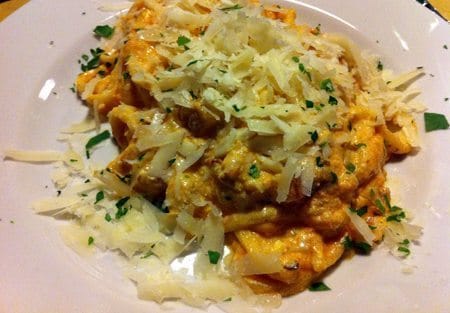 First courses are mainly pastas and, though I was tempted by the bean and chestnut soup (€8), I chose the lombrichelli, hand rolled noodles, with guanciale, tomato and ricotta (€9). This creamy twist on amatriciana tasted lighter than it looked and didn’t have that oppressive oiliness that so many amatricianas (ESPECIALLY those in Monti) suffer from these days. Other primi include fettucine with artichokes and lentils (€10) and lasagna with ricotta and chickory (€8).

I skipped the second course and went straight to dessert, or rather desserts. I’m detoxing, remember? Secondi included lamb with artichokes (€15), baked ham hock with cinnamon (€13), rabbit cooked with vinegar, tomato and pine nuts (€13), and stewed cod with raisins (€14). In the end, I wasn’t bowled over by the desserts, an assortment of four: bread tiramisu, a sage and saffron flan, whipped ricotta, and chocolate mouse (or whatever vellutata translates to). Two of them had white chocolate nibs on them and white chocolate is a crime against nature. Next time I’ll go for the secondo.

In all, L’Asino d’Oro was great. The food was good, made with quality ingredients, the service was kind, the price was right (at the lower end of the moderate scale and at the proper price point for the zone), and there was a beer list featuring Almond 22, Birrificio Maiella, Birra del Borgo, and Opperbacco. There is also an amazingly affordable lunch menu priced at €12, which includes a starter, first course, second course, water and a glass of wine. At around 5pm, there is a “merenda”, sort of an aperitivo hour where patrons can come and drink wine or beer accompanied by snacks priced at €3 per portion. Now I just hope Sforza stops with the southward migration and stays put!