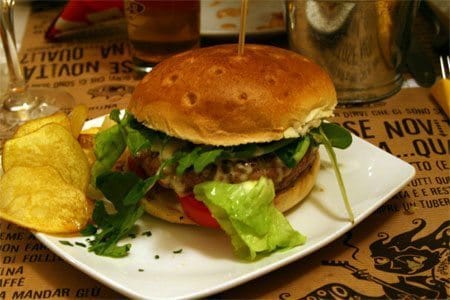 I will start with the pros of this newish place near Campo de’ Fiori in Rome before launching into the cons. The crocche’ cacio e pepe (fried mashed potatoes rolled in pecorino and pepper) were really really good. They were nice and crispy with a liberal amount of grated cheese that added a pleasant saltiness. Second, there is a huge selection of artisinal Italian beers, nearly 140 between their draft and bottle offerings. (I should mention that Piedmont-based Baladin is the leading Italian micro brewery). Finally, the food is undeniably cheap. This latter attribute is why we didn’t leave the place fuming. At least we didn’t pay a lot for what tasted suspiciously like a frozen burger.

I have to say that I was skeptical about finding a great burger in Rome but was encouraged when my friends at Food in Rome and Rome Photo Blog recommend Open Baladin. Blinded by hope and brimming with expectations, I visited the place last Sunday evening. Things started off with a bang with the crocche’ then started to go downhill with the potato chips. They had been fried in oil that was not quite hot enough, leaving them soggy and oil-logged. Next, the disappointing burgers. The meat tasted like it had been frozen and defrosted. It was tasteless, gummy, there was no blood, and no Malliard reaction.

Call me a purist, but I define a burger as a patty made from freshly ground meat, ideally with a little extra fat added. Said patty is then grilled to the specified cooking temperature. Grilling fresh meat creates a charred protein layer, rich in flavor (this is the Malliard reaction). Frozen meat loses flavor due to a change in lipid composition and the Malliard effect is inhibited due to deterioration of amino acids. Freezing and defrosting also affects the texture of the meat, perhaps contributing to the gumminess we detected.

Open Baladin’s novelty means that it will most likely be viewed positively and its poor excuse for a burger will be overlooked. In the meantime, I will stick to their crocche’ and beer. I still have 137 brews to try.