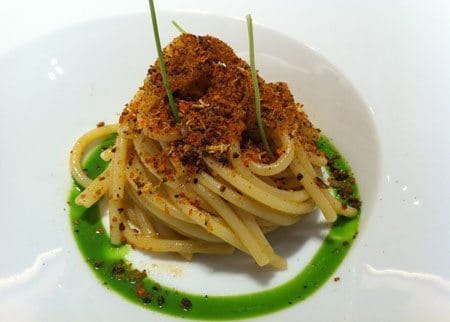 Facebook. The necessary evil. I hate that I need it and that it is the absolute best way to get in touch with chefs and restaurants in Italy. Better than email and telephone you ask? Often, yes. Take the case of Metamorfosi, for instance. This fancy new restaurant opened less than a month ago in Rome’s posh Parioli district and I tried to make a reservation but the phone line hadn’t yet been sorted out and several emails to the address listed on the site were bounced back. It’s not exactly convenient to swing by, so I took a shot at my last resort. I looked up Chef Roy Caceres on Facebook, explained the difficulty I had reaching the restaurant, and asked how I should go about making a booking. Within a few hours I heard from Mr. Caceres and had a table for one for Monday lunch.

I arrived for lunch reservation yesterday at 1pm and for a while I was the only patron in the restaurant. Service was accordingly very attentive and efficient (and would remain so, even after others arrived) and the Chef even came up from the kitchen to find out how I had learned of Metamorfosi (actually it was via a conversation that came up on my Facebook feed. Being a voyeur is rewarding!). I ordered the 8-course tasting menu and he asked my preferences. In a 30-second phone call and a two-minute face-to-face conversation, it became clear that the first thing everyone says about Chef Caceres is true. He is a really really nice guy. Forgive the hippy-dippy mumbojumbo, but he really does seems to wear an aura of kindness. The second thing they say about him is that he is the consummate host who tries to engage his guests’ senses and emotions through his transformation of ingredients. The name of his new restaurant pays tribute to that idea. 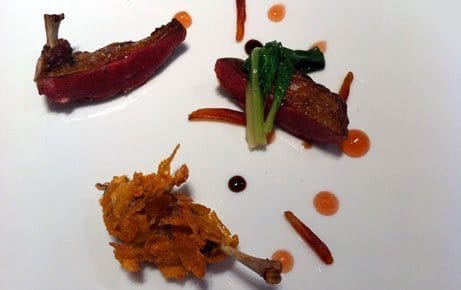 And now for some more objective statements about the chef: He was born in Bogata in 1977, and came to Italy at the age of 16. Since then, he has worked in some important restaurants, including the Relais & Chateaux “Il Pellicano” (Porto Ercole), the Locanda Solarola where he held a Michelin star (Castel Guelfo), and Pipero (Albano Laziale). Metamorfosi is still in its nascent phase, but is already earning some buzz in Rome.

I’ll go ahead and add to it: the spaghetti Masciarelli con polvere di cozze (artisinal spaghetti from Abruzzo dusted with the powder of dehydrated mussels) was one of the best things I’ve eaten all year, the pigeon was perfectly cooked and the white chocolate mousse was insanely good. I didn’t love everything on the menu and at €110 for lunch (including two glasses of wine) Metamorfosi can’t be my everyday lunch spot, but I’ll surely be back again and I’m eager to try more.