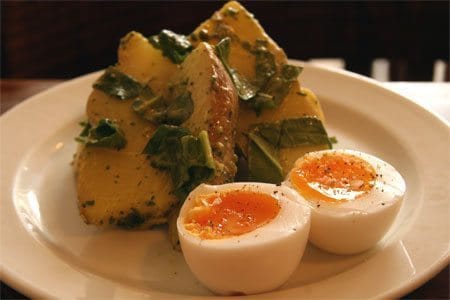 A few weeks back, I stopped at St John Bread & Wine in Spitalfields for a quick lunch. It was a Friday, I was by myself, and as a solo diner was not exactly a priority on such a busy lunch hour. More on that later. I started out with six gorgeous rock oysters and a glass of Sèvre et Maine’s Muscadet Sur Lie. The oysters were perfectly shucked and presented. As I ate them, the restaurant began to fill up with groups large and small, mostly business people out for holiday office parties. At this point, I fell totally off my server’s radar and things started to go haywire. First, the runner dropped a dish at my table that I did not order, potatoes with sorrels and soft boiled duck egg. As my server was occupied across the dining room for the next five minutes and I could not get her attention (and I was famished), I decided to eat what I had been served. No food was coming out of the kitchen for the other tables and I figured if five minutes had passed and no one was looking for the dish, it was mine. The duck egg’s runny yolk coated the firm and starchy potatoes and paired nicely with the tangy vinaigrette and citrusy sorrel. After I finished the dish, I waited (I kid you not) thirty minutes before my server came to my table or glanced in my direction. When she did acknowledge me, she asked if I was ready for the next course. I explained that I had been served the wrong thing, waited for her for a half hour after I had cleaned my plate. She issued profuse apologies, offered to fire my order that moment, but I had to get going so no pheasant and sprout tops for me. She brought the (discounted) bill and I left, disappointed less by the poor service than having missed more of St John’s impeccable seasonal English fare.