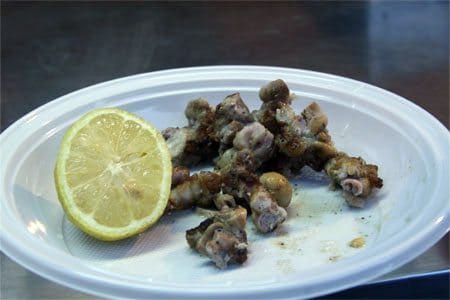 After a satisfying lunch of seasonal vegetable starters and fried fish at Zia Pina near the Vucciria, I set out with my friends Diana and Conchita in search of dessert. Our destination was Cappello, a pastry shop just outside Porta Nuova famous for its setteveli (seven layer chocolate cake). When we arrived, we found the shutters closed and each issued a different but equally heartfelt sigh of despair. Could Cappello be closed on Wednesday? A man cutting wood across the street confirmed our suspicions. We were sad for a minute then realized that when people cut wood by the side of the road in Palermo, they are preparing to grill something delicious. In this case, stigghiuole, lamb intestines.

His stall wouldn’t open for another hour so we had some time to kill. Conchita took us to nearby Pasticceria Massaro, where we passed the time with setteveli, cassata, and custard tarts. After an hour of carbo loading, we were ready for some offal. As we made our way back to the stigghiuole stand, we saw smoke hanging thick over the surrounding area. When we reached the stall, we realized it wasn’t the intestines cooking that was making the smoke, but a lump of fat. The stigghiuolaro explained to us that he cooks the fat as a tactic to attract passersby. It worked. The man is a genius.

We ordered our grilled intestines and he cut them from long links hanging above his chopping block. He then skewered them and threw them on the grill. I asked if I could cook them and permission was granted them with the instruction: girali ogni tanto, turn them every so often. And so I did, allowing a charcoal induced crust to form on either side. Once they were done, the stigghiuolaro pulled them off skewers, cut them into shreds, and plated them. I added some salt, squeezed a bit of lemon, and we dug into what for any other people I know, would not have qualified as a second dessert.