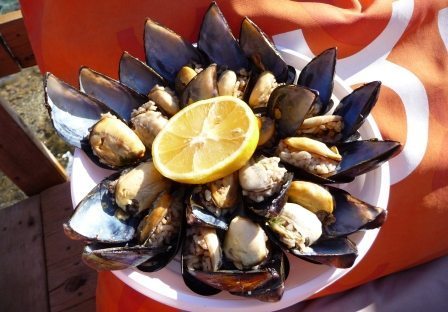 Last Thursday I arrived in Bodrum after a month-long 2000 km trip through south central Anatolia. It was almost exactly 7 years to the day that I first visited Bodrum back in 2002, similarly at the end of a long trip; in that case a 3-month long journey through Russia and Eastern Europe. In both cases, I was in dire need of the rejuvinating effect of Bodrum’s sun, sea, and, most of all, food.

Each time I visit Bodrum, I make it a point to eat an unhealthy number of midye dolma, mussles stuffed with spiced rice while still raw, closed, steamed, and served in their shells. They are plated to order, one shell removed and positioned to leverage the mussle from its lower shell, acting like a sort of spoon.

While midye dolma are widely available throughout Turkey, even on the streets of Istanbul, Bodrum’s are among the best in the country (others would argure the crown goes to Izmir). We certainly didn’t squader any opportunity to indulge in this delicacy. At 4:30PM each day, my friends and I would pull ourselves away from the orange and tan pillows of Aktur’s İnceburun Beach and visit the the mussle vendor who would set up shop near the beach bar. Attempting to pace ourselves, we would order 20 at a time (at the affordable price of 15TL, or 7.50 euros each). Invariably we would go back for seconds, never quite satisfied with just one plate.

For some of my friends, it was their first time tasting stuffed mussles and their assessment was the same as mine had been all those years ago: midye dolma are pure magic. Slightly sweet, a bit spicy, and almost meaty, these flavorful snacks are just another reason why it is physically painful to leave Bodrum.